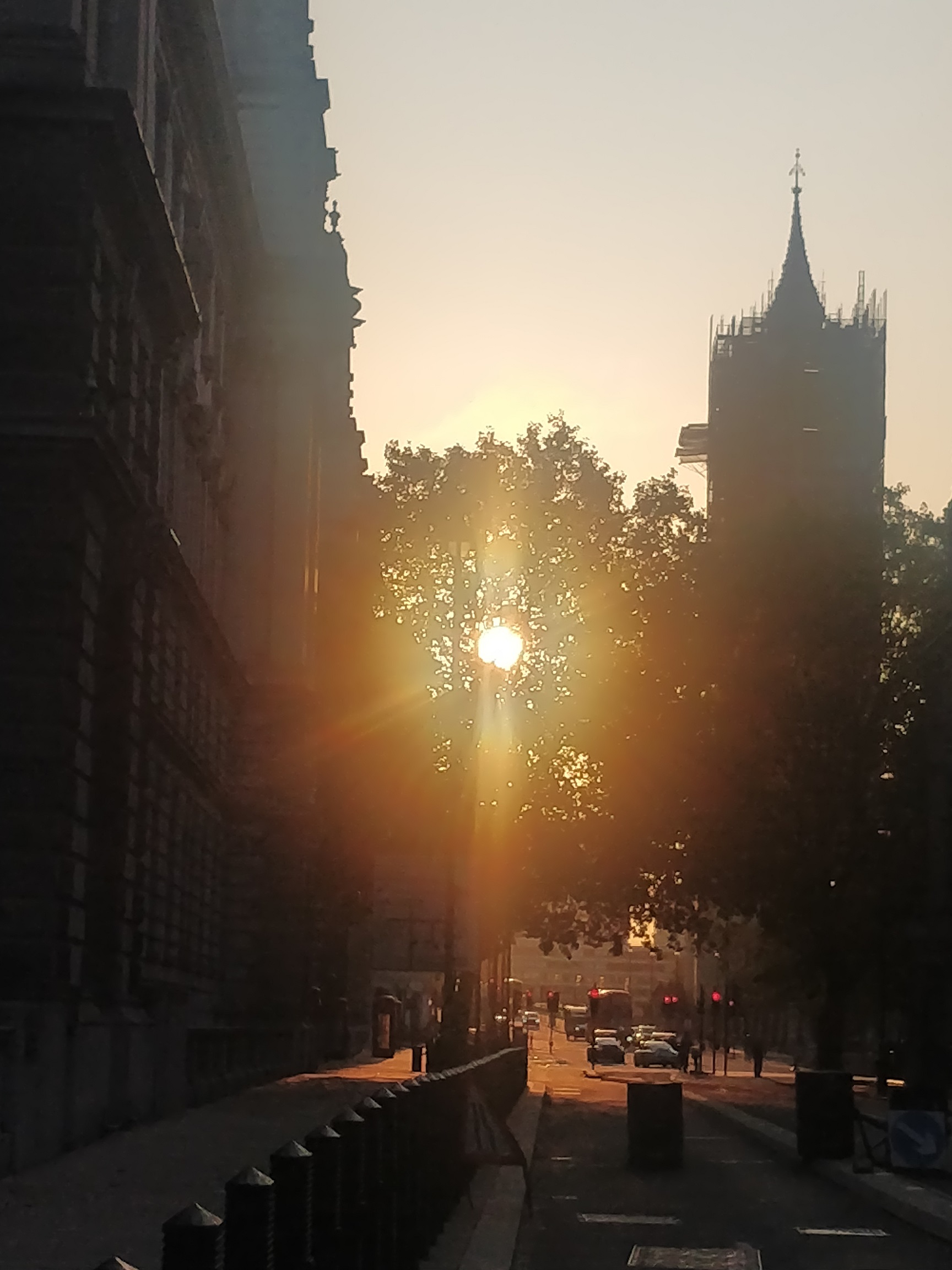 Sometimes I get rampant insomnia.  I do everything right – I get out of bed for a bit if I can’t sleep, read a book, stay calm and chilled etc..  I also do everything right going to bed – a sleep ritual, consistent hours, low lights etc..  The whole boodle.  But still sometimes it goes wrong.  And last time it went wrong, I figured… screw it.  It was 4 a.m., I wasn’t going back to sleep, the sun was due to come up at 6.48, may as well make the most of it.

I ate my oats, waited until 6 a.m., pulled on my running shoes, and went for a jog.

My mission was a slow, long-ish run.  What I actually ended up doing was a relatively fast long-ish run, but with lots of stops on the way to take photos and appreciate the vibe.  My first destination was the river.  Specifically, Millenium Bridge.  I wanted to try and see the sun come up, which I reckoned it would do somewhere over Stratford.  For this purpose I either needed a huge patch of open space – like Hackney Marshes, which was a bit out of my range for this hour of the the morning – a hill like Primrose Hill – and I hate running uphill even when I’ve slept – or as the next-best option, a bridge over the river.

Millenium Bridge has always been one of my favourites, even when it was bouncy.  A lovely pedestrian bridge linking St. Paul’s Cathedral to Tate Modern, at 6.40 a.m., when I reached it, there were only three other people on it, and they were all photographers.  The light was that low grey you get just before sunrise, with that blue in the sky that is both soft but also thick, riddled with streaks of pink above the deep grey clouds.  The buses I passed still had their headlights on as they rolled through empty streets, and the only noise off Cheapside were the pigeons.  I stopped above the middle of the Thames, did my running jacket back up against the early-morning cold, and waited, watching the clock on the cathedral out of the corner of my eye.  Alas, there were thick clouds on the eastern horizon that obscured the sun, even if I could have seen it on the angle I was at, but I watched the river rushing in a busy tide beenath my feet and waited for dawn anyway, just because I could.  A film crew was setting up outside Shakespeare’s Globe, vans tucked into the cobbles by the house where Christopher Wren used to live when he was watching London rebuild after the great fire.  The crew had dudes in flourescent jackets with radios at either end of the bridge, which rather implied they were going to try and close the bridge at some point imminently for a shoot.  I wondered how late they could stay in the day, and what the light would be like when they finally got their shots, but as standing still was a bit nippy, I kept on running rather than wait and see.  London is currently full of film crews, making up it seems for time lost during lockdown.

I jogged to the south side of the river, and ran west.  Usually I’d go east, as the river gets much quieter once you’re past Tower Bridge and I enjoy the mix of architecture through Rotherhithe – all converted industrial warehouses, local council housing, modern flats and unexpected patches of sloping green.  It’s only downside is that there aren’t any pedestrian crossings back until the Greenwich foot tunnel, which would have made my long run into a flipping epic more-than-half-marathon.  The western turn towards the National Theatre, London Eye and many bridges is usually packed with tourists and families, meaning you have to dedicate a significant amount of brain space to weaving at a sensible social distance.  But at 7 a.m. on a Sunday morning, it was empty.  The gate was shut across Blackfrairs station, though the advertisement boards still played through the grid to an empty nothing.  Beneath the bridge there were building works, pools of slippery wet sand that myself and the runner I bumped into coming the other way had to tip-toe over to avoid face-planting.  Beneath the Oxo Tower I encountered a group of maybe half a dozen teenagers, dressed in black jacket and thick-heeled shoes.  They were either the very first people off the train from Waterloo, or they’d been up all night, and were only now weaving their way loudly through the cold quiet of morning towards home.

The tables were empty at Waterloo Bridge where usually there are books for sale; the vans selling street food were shuttered and the only people out were litter-pickers in green and the occasional other jogger.  The other joggers were all much faster than me, and looked accustomed to an early-morning run, and in my mind made kale smoothies and could do all those hand balance type poses in yoga too.  The usual gridlock at the London Eye/London Aquarium was entirely absent.  One security guy stood by the empty barriers where a winding queue should be, watching people jogging by with an expression of disbelief, mingled with a little sadness at the folly of runners who could be in bed.  At Lambeth Palace I encountered my first wallop of actual dawn sunlight, a shaft of sudden blinding illumination and unexpected heat slipping through the trees between the old palace walls and garden.  It was so unexpectedly vivid on the otherwise cool grey of the morning that I stopped for my first proper picture, the scaffolding of Big Ben at my back.  Another runner stopped at the base of Lambeth Bridge to check a map.  That really was dedication, I decided – not just the folly of getting out of bed before 10 a.m. on a Sunday, but to choose to run a route you didn’t know well, an added mental strain to join the physical one.  I crossed the bridge after him, wiggling through the back end of Westminster towards St. James.  I have always considered those back streets to be the fantasy-streets of Dickensian TV adaptations, full of top hats and gas lights, that are so often shown as representative of the city and which cover perhaps less than a fraction of a percent of its area.  Round a square that sheltered a white-stone church, past glass government offices and bookshops selling religion and salvation, I nosed my way up to St. James Park just in time to catch the sound of the pelicans doing their morning warm-ups.  If you’ve never heard the sound eight or nine pelicans doing the equivalent of a dawn chorus, imagine the waste pipe of your sink could loudly sqwark its frustration, and you’re on the right path.  It was strangely hypnotic, as more light rose through the buildings of Whitehall and started to pick at the tops of the high trees.

The only people still out and about were the cops set to guarding gates, and the odd straggler in Trafalgar Square.  A few tents were around the edges of St. Martin’s in the Fields, which does some excellent and much-needed homeless outreach in the city, but the usual bustle of Covent Garden was an empty blank disturbed only by the pungent rattle of the dustbin cart.  The traffic lights at Holborn – usually a frustrating grind of gridlock – were meaningless on the empty streets, and as I hit Chancery Lane the full force of the day smacked straight into my face past the high glass towers of the City.  Eastern light reflected off the glass of the taller, tighter residential streets as I headed north, creating anti-shadows in bounced, distorted pools of gold.  My intention was to keep running all the way home, but about a kilometer out I ran head-first into a smell of cinnamon unlike any I had ever encountered before in my life.  The insomnia may have helped with this impression.  A bakery was opening its doors, and huge, sugar-coated cinnamon buns straight from the oven were laid out in the window.  I have run through physical walls, through mental walls, through pain and rain.  Nothing was gonna keep me running when I could be eating cinnamon instead.

In many ways I got the perfect time of year for a dawn run.  By the time I got home, the day was gently warming, while still being cool.  The sun rose late enough to not actually be obscene, but early enough that the streets were empty.  But most of all – more than anything else – the return leg of that run put me outside that blessed, magical bakery for the moment of truth, and if I had to run again for that damn bun, I absolutely would.