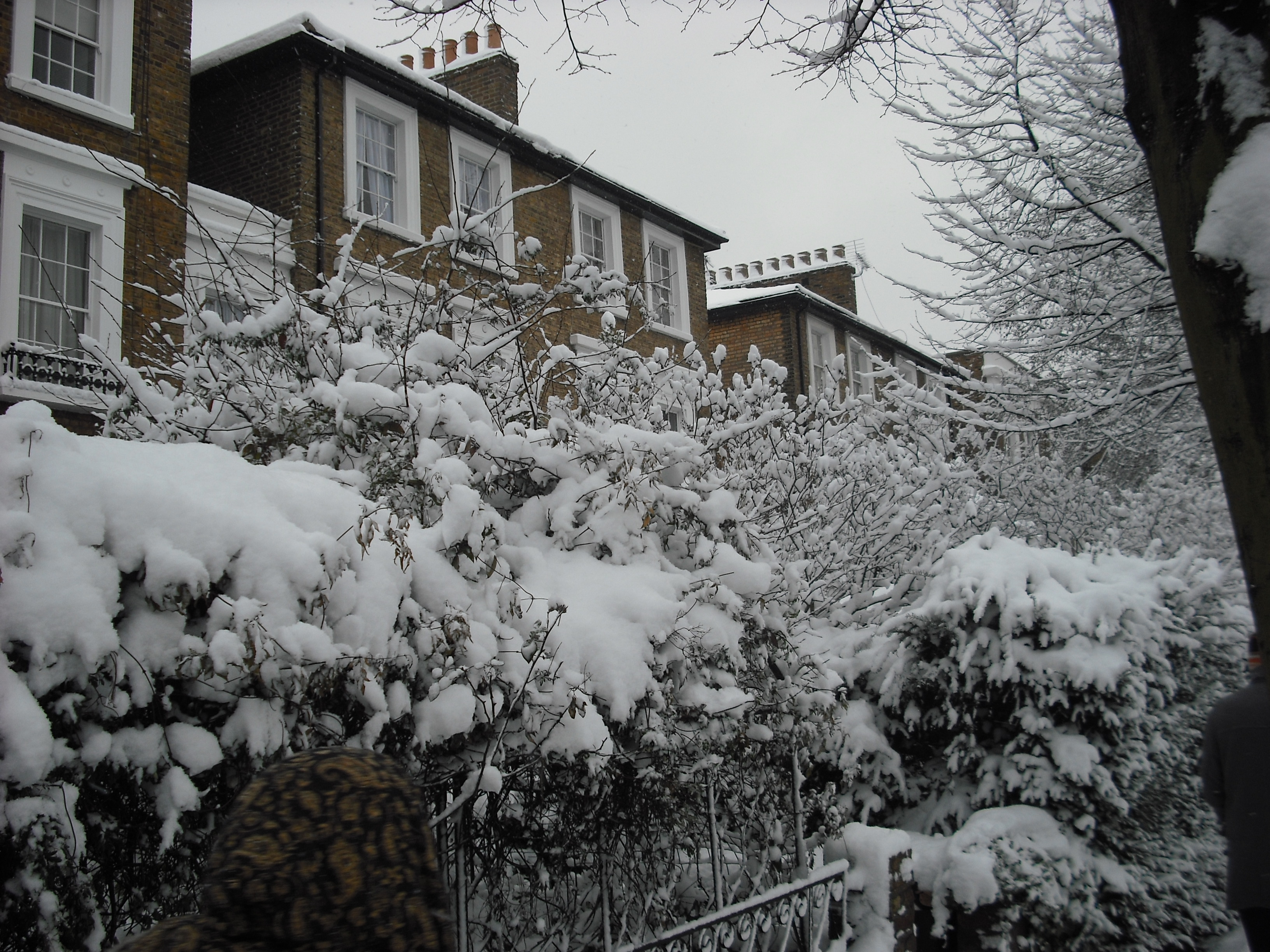 The weather report says snow is coming.  Some of us still remember when this was a regular thing, but that was 20 years ago.  Transport for London starts issuing warnings.  Not “don’t travel” just, “expect disruption” because they know from bitter experience that it’s not enough to say “there might be snow”.  If you want to avoid the irate emails, the snarky tweets, the furious interviews from shuttered platforms with local news, you gotta say “it’s gonna go wrong”.  Somehow that makes everything already better. It’s the same with the ad campaign on the underground.  “You plan for the weather… so why not for disruption?” ask the posters on the tube.  Because let’s face it, disruption will happen.  You will be shafted by the system.  AND IT’S YOUR FAULT.

In some streets, they grit – too soon!  Too soon, it’s all washed away by the time the skies actually open you fools!  The rest of us laugh dismissively at the cowardice of people who don’t understand that it’s just a bit of snow, and carry on.

It starts to snow.  A bit.  Not very much.  Most kids are ecstatic.  A couple are not.  They cower behind their parents, displeased by this thin, alien stuff.  We peer against windows, wondering if it will settle.  It does not.  It’s just extra cold rain.  Transport for London issues another warning.  “We coped very well today because we’re great,” is the gist, “But expect disruptions tomorrow.”  My admiration for TFL soars; we’re all in this together, and by our heroic perseverance, both we and the tube and bus network survived a light dusting of snow in one piece, HURRAH London!

It’s cold, but the ground is dry and no snow has settled. There are a few warning signs… a little patch of thin ice in the shadow of the trees… canal boats locked in by frozen water… but meh, most of the water is still liquid.  We head to work, thinking it was all a big fuss about nothing.  Then whoosh!  The skies flipping open, and snowflakes the size of my thumb start drifting down, spinning a gentle dance through the air, beautiful, magical, muffling all around.  Within a few minutes there’s two inches of snow on the ground, and about fifteen seconds after that the snowball fights have begun.  Children run around in delight; tourists from warmer climes stare in wonder; people rush out of work to take selfies of themselves with ice clinging to their hair.  This is awesome!  VIVA SNOW DAY!

Still snowing.  Really quite hard.  That’s fine, though, right, because actually fresh powder mean the pavements are still walkable on.  There’s nothing quite as satisfying as the crunch of fresh, packed, perfect snow, and the thick erasing of yesterday’s marks mean it feels like we’re starting today brand new, shiny and clean.  The traffic, though, has slowed to 5 mph in all but the biggest roads, and even they are blocked by the gridlock spreading across the city.  But it’s ok, we all planned for this.  Employers were warned it might be a working from home day, we all leave extra time for our journey, and TFL has spent so much time explaining how it might go wrong and how if it doesn’t it’s because they’re STUNNINGLY excellent – first the Spanish Armada, then the Dambusters, now TFL on a snow day! – that even where things are going wrong, it’s with a fairly good humour.  The rooftops are steaming with a dozen boiler pipes pumping at full blast.  The sewer covers are squares of black iron, warmed by the effluence below, on which ice cannot form, bursts of vapour rising from between the cracks.  So long as no one has to get anywhere, it’s fine, right?  Go London.

Christ it’s cold.  On the back streets, the snow is now a solid white mass flecked with brown and grey.  A few people have attempted to grit, but it’s just created this sorta pink slurry.  The sides of the roads are black slush of piled, crunchy ice.  It’s not yet deadly slippery, except for where fresh grit and old snow are competing for which is gonna trip you first, but the pavements are still full of people doing the cautious old lady walk.  My Mum goes down the stairs outside her house sideways, for fear of a broken leg.  There’s a random dude next to me as I write in the cafe, who’s sat down on a portable radiator, one leg either side.  He doesn’t order coffee or cake.  There are lesions on his hands, and the skin is bright pink from cold.  The staff politely don’t say anything, which feels correct, and let him huddle.

The first reports of people freezing to death – especially the homeless – are starting to slip into the news.  Outside London, the Met Office is doing unto Britain what TFL does unto the city, and begging people not to travel.  But most of the roads have been driven on enough now that cars are getting around easier, even if pedestrians are starting to shuffle.  Away from the high street, a lot of shops have the shutters down.  TFL is very proud of the good service it’s running on most lines, and where it’s not, it’s working tirelessly, tirelessly they say, and isn’t it great how we’re all in it together?  My medic mate texts: “I’m worried about ice.”  It takes me a while to realise she’s thinking of the orthopedic departments and A&E.

The fridge is looking really quite bare.  I know I should go to the shops, but it’s really cold and really slippery outside.  Is it ethically wrong to phone for pizza, given that my main reason for not going out is how shit it is?  Thankfully, the neighbouring flats around me hate the cold and have their heating on full blast, so as long as I stay in my famous sleeping-bag-with-arms-and-legs and keep gloves on, everything should be fine, right?  Right….?

BORED NOW!  WANT EITHER NEW WHITE SNOW TO BE PRETTY OR EVERYTHING TO MELT!  REALLY COLD!

It’s meeeellllttttiiinnggggg!  Meeeeellllttttinnnnggg!  London gathers round to watch the last little patch of snow vanish from the longest shadows.  So sad.  Winter is ending.  It was so beautiful.  It was so lovely and so much fun for the kids and… sniff… does it really have to end?  Except wait!  Is that the bud of a daffodil poking up from between the vanishing crystals?  Does this mean… springtime?!  TfL is happy to report that the weather warning has returned to normal, but travellers should expect disruption owing to unexpected strong winds.  Thankfully, we’ll get through it, like the heroes we are.