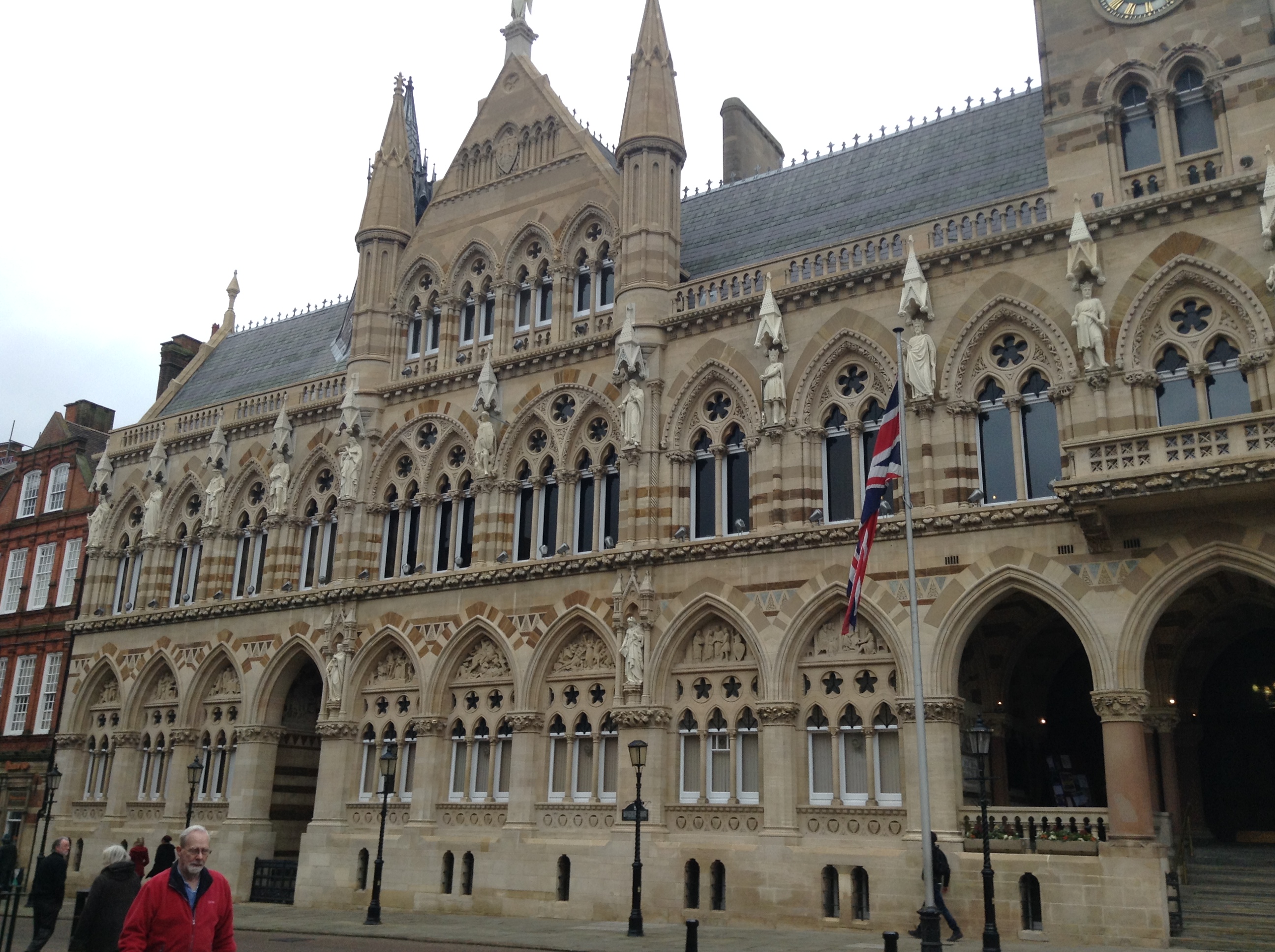 Let’s not kid ourselves.  Northampton is not the glamorous throbbing heart of the North.  Once it was clearly awesome.  It has a museum dedicated to the history of shoe manufacture, which once it was a centre of, a beautiful guildhall, a nice market and an absolutely lovely theatre.  The rest… well… I’ve seen sexier places.  But!  It is a cliche for a Londoner to bemoan anywhere that isn’t London, and for an inner city girl to bemoan anywhere outside transport zone 3, so in the interest of defying stereotype, let’s look at the good news.

I was in Northampton to light two shows at the Theatre Royal.  The theatre is beautiful.  A proper old proscenium arch space with a lovely auditorium, spacious stage and an awesome roof (I know that last doesn’t sound like high praise, but seriously, standing on stage and looking to the grid, I was wowed).  It’s also one of few hemp flying houses still in England.  For anyone who doesn’t know – and moreover, is mildly curious – most theatre flying – the means by which curtains and bits of set are lifted in and out – is on a series of counterweights.  If you have 200kg of set, then you have 200kg of stage weights counterbalancing it, which allows the flyman to haul a large amount of weight without giving themselves a hernia.  Which isn’t to say it’s always easy – the time I spent as flyman during my training was exhausting, because while it’s all very well having a mostly-balanced system to fly, overcoming inertia one way and momentum the other on a fast, heavy bit of flying can – and frequently does – have the effect of pulling you physically off your feet with the force of it.

That’s counterweight flying.  Hemp flying has no counterweights at all.  On one end of the system you have, say, 150kg of weight, and on the other you have four or five hearty men and some rope.  There are some pros to this system… but when you’re trying to fly out fully loaded lighting bars at 9 o’clock on a Monday morning you can struggle to remember them.

As is the nature of theatre lighting, during the week I was actually staying in Northampton, I mostly saw the inside of a theatre.  Hence my fascination with the flying system.  However, the shows were awesome and the crew were lovely.  As a collective technical team I think we proved once and for all that it is possible to go into a production with absolute professionalism and an endless supply of cheese jokes, and achieve everything we need to in the process.

Despite the hectic madness that is technical rehearsals, I also spent a lot of time popping up and down from London in the weeks proceeding, and did my best to get some sort of a nose around en route.

First impression of Northampton: it has a lot of Chinese takeaways.  It is a great sadness to me that I didn’t get a chance to try one.

Second impression: it is magnificently served by outlets of Greggs the Baker.  Bring on greasy sausage rolls!  If you head east out of town, there’s a cricket pitch and Abington Park, where I spent my only free afternoon watching two dogs that looked closer to waggy-tailed sheep trying – and failing – to learn how to swim.  Children played, ice cream was consumed, lovers went on walks through the overgrown bits and generally speaking, an aura of ‘nice place to have a picnic’ prevailed.

I wouldn’t be in a hurry to say that Northampton is a beautiful place to live, or a particularly serene one.  It is, however, a fairly real place to live, and rightly proud of some of the awesome things it has.  The theatre is a big part of this pride, and rightly so, and I only hope in the time we spent there we did right by it.