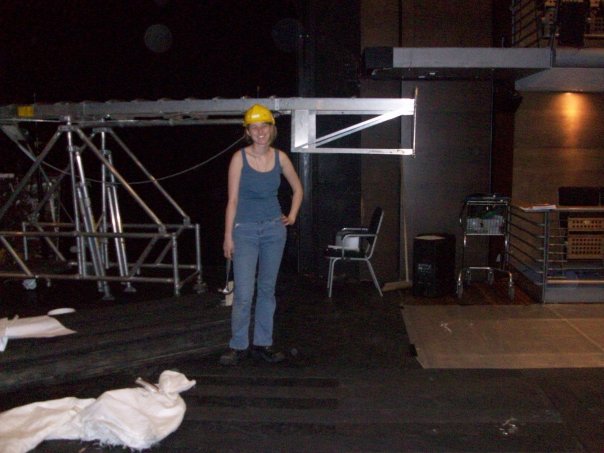 Since it has been a while since I blogged, I figured that this was the prime opportunity to explain why. The summary can be just one word: RADA.

Or, if you feel like it, the Royal Academy of Dramatic Arts.

First thing you need to know is that yes, there is indeed a picture of the queen in the main entry hall, and yes, it has produced a lot of famous actors. Second thing you need to know is that I will never, ever be one of them. I am on the Technical Theatre Stage Management course, where we learn every skill from how to weld and cast fibreglass (two things I do poorly) to how to hang lamps, sow on buttons and run various bits of occasionally frightening machinery. Currently, I am in the Stagecraft department, which essentially means I do a bit of everything. In the last few weeks a typical day begins at 9 a.m., and can encompass anything from woodwork with the construction department, faking wood graining with scenic art, hanging ornaments with props, masking off wings with the technical manager, flying the flies and without fail, playing that perpetual and favourite RADA game – hunting the goods lift. The scale of the productions means that most of these days don’t end until 10 p.m., at which point the production manager lets us out of the back of the building in slightly ragged drips and drabs for the whole thing to begin again.

During shows, I have a show role. This has ranged from everything from opening a door (my first, inglorious duty) to helping quick change four actors simultaneously out of horse costumes into clerks and then back into roller skating waiters or Chinese palace guards, in the blackness of a wing already crowded by the presence of a rather large and not very mobile elephant. The show role I have on this round of plays – and which has kept me from blogging! – is as fly crew on one show, and all-purpose dogsbody on another. As dogsbody, my duties are a long way from exciting, and probably not worth wasting words on. As fly crew, however, you do get a feeling of what it must be like to be in an active war zone. I sit with my crew partner up in the darkness of the flys, entirely cut off from the outside world except for a set of cans – essentially a wired intercom system – through which occasionally mystic messages will be passed up from the stage manager or whispers of distant crises unfolded through a haze of static. We play cards, we play chess, we doze, we read, we wait. Someone is always on cans, listening. Somewhere, a long way below, we can hear the sound of actors acting, and from the very back of our floor we can glimpse dressers waiting in the wings to do a quick change, or strange objects suspended overhead by chains or steel wire ropes, far above the audience’s sight line.

Then, every forty or so minutes, we’ll get a call – ‘flys standby’, and either I or my partner will leap up to the bar we have to control, which in this particular case is attached to a massive set of blue house curtains weighing roughly 50 kg. It’s all nicely counterbalanced, so moving the 50 kg isn’t actually that much of a problem, except for stopping or starting. We wait – by now we know pretty much when the end of the scene is coming. We get a ‘go’, and haul like the bloody wind. For about a minute and a half we pull those damn curtains in and out, in and out, like a deranged aerial version of the hokey-cokey, during which times both the hauler and the hauler’s partner’s heartbeats hit triple figures as we miss or hit our marks, try to get the speed up fast enough to meet the stage manager’s relentless calls of ‘go… go… go….’, turn the rope, pull the other way, hit the bottom, turn again, pull back up, turn again, until we hit our final mark and stop, hyperventilate a little bit, sit down, and once again, wait, quietly in the dark.

This only happens three times in the show – and the last time it happens the flys have to go so fast that our stage manager has pretty much given up on calling all the cues, and we have just come to learn through a great deal of error when we have to turn the curtains to haul the other way. I tell myself that it’s all beautifully counter balanced, and the system is on my side. But I must admit, sitting here now, writing this, I am surprised to discover that I can feel places aching not just along my arms, but right down into my belly, that I didn’t realise could ache quite so profoundly – until now.

I should, as a final note to this, say that I have seen some excellent plays at RADA, including some truly beautiful flying and some fantastic lighting. And, though as a techie, I am supposed to be extremely blaise about it, I have also seen some fantastic acting. So if you happen to be audience member any time soon, and you see curtains or sets or anything that has been suspended from the ceiling descend with any grace or art, take a moment to think of the flymen. For all you know, one day it might be me….