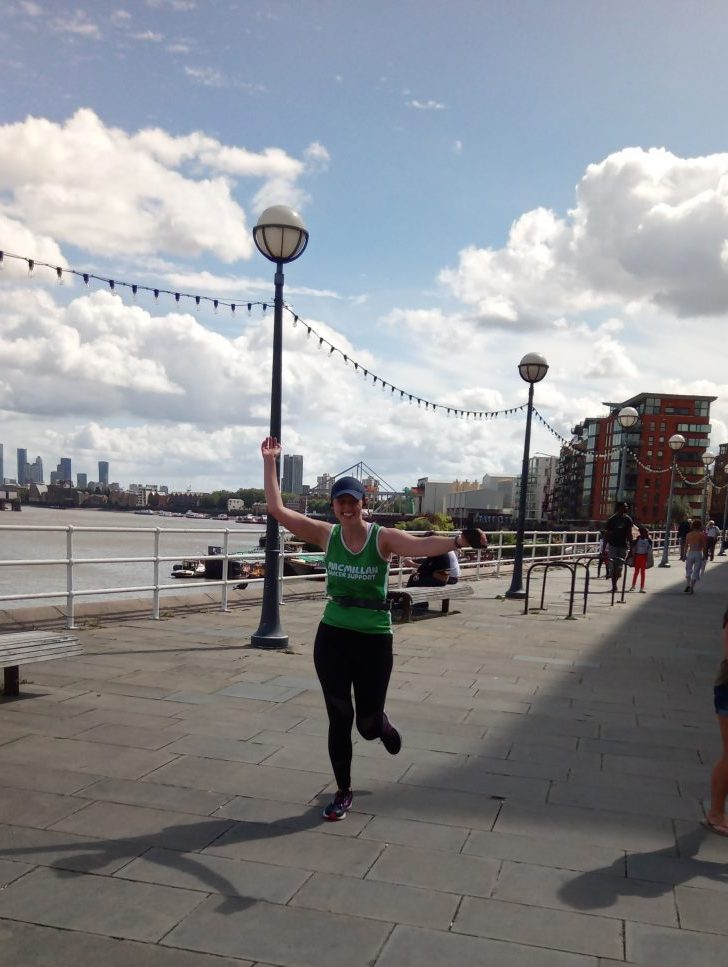 There were a lot of storms between the end of 2019 and beginning of 2020.  Storm Clara, Storm Ciara, Storm… Caitlin – I know they didn’t all begin with ‘C’ owing to Met Office naming practices, but it felt personally like every woman from the start of the alphabet was out to personally rain on me for some slight I’d bestowed against the heavens.  This is of course an illusion.  But there’s nothing like trying to train for a half marathon while the sky is falling to really let a good prejudice take root.  Months of wet socks and freezing hands – one day I’ll record proper footage of what happens when blood returns to my fingers, pinkness spreading one digit at a time through shrivelled yellow fingertips.  It ssssuuuuccckkked.  And it sucked in the name of the Hackney Half.

Ah the Hackney Half.  A glorious half marathon through my home borough, from the Olympic Park down towards the city and back up in a great, crowd-cheering, drum-banging, flag-waving hurrah of east London at its awesomest.  Am I biased?  100%.  It’s the best, and I was gonna flipping run it with the grace and aplomb of a drunken kangaroo.

But first: training.  I have no interest in going fast, but I am interested in not being injured, and that requires work.  By March 2020 the weather was improving, I was getting stronger, the shin splints were starting to chill out and there were rumours of a little sort of pandemic thing perhaps on the horizon.

“It’ll be fine!” I opined – do you remember talking to people in real-time, in enclosed spaces?  It feels a distant dream now.  “The information out of China suggests it’s just a really dodgy flu.”

By April it was apparent that the Hackney Half was going to have to cancel, but who knew anything at the start of 2020?  Not me; not the UK government; not the race organisers.  There was talk of delaying it until August, October perhaps, and so I kept training just in case, with a sinking feeling basically everywhere.  Those pictures of beautiful women with silken hair running into the sunset with beatific smiles?  I seethe to behold them.

When the organisers bowed to inevitability and cancelled the half marathon for 2020, I was at long runs of around 18km – or in other words pretty much ready to go.  But lockdown mehness was setting in and everything kinda stank, so without a goal in mind I did my once-daily-government-mandated-exercise on autopilot through streets growing very familiar indeed.

However by July wallowing was losing its appeal, so after one of those weekends of looking up “how to protect your mental and physical health while going batshit barmy” type fests we’ve all been through several times in the last year or so, I figured screw it.  Let’s run a half marathon anyway.

I picked a couple of Saturdays in August which were likely candidates, stepped the training back up and on August 21st turned on my phone’s running app, and went and did it.  Three of my friends agreed to be my virtual cheering buddies – I gave them location access so they could see where I was at, and only later discovered this would only work if I also turned on mobile data – but still, the idea was nice and they loyally texted encouragement throughout the morning.

I also plotted my route to the metre and predicted that it would end about 500m before Tower Bridge, which felt like a nice, triumphant conclusion to the endeavour.  I personally feel that GPS shafted me in this one, ‘cos it ended about 100m before Tower Bridge, with my partner, who’d agreed to meet me at the end, running along beside me for the last 50m as I waited for technology to decide that yes, no but yes, this was totally a thing that had happened.  400m is not much.  By then it was a geographical slap in the face.

The whole thing took about 2 hrs 30 mins, give or take a bit of time spent in the Greenwich Foot Tunnel and the constant winding of the Thames Path.  For the first 10km I was pretty sure I was queen of the universe.  I reached the eerie quiet of Canary Wharf, not a banker in sight, the grey towers looming empty and cold, feeling pretty good.  I wound past the city farm at Mudchute, enjoyed the view down to the Admiralty at Greenwich, popped up in front of Cutty Sark feeling… like I was definitely running… but also like something of a tourist, enjoying the vibes of my own city.  By the time I reached the enormous (shut) pub by the bridge at Rotherhithe that always feels one mug of grog away from being a pirate’s den, my legs were concrete but the end was in sight.  By the ruins of King Edward’s Palace, I was at walk-run-walk-run, but seeing my partner at the end produced the inevitable half-falling sprint to the finish that you always do when you suddenly realise it’s about to be over and loved ones are watching.

The light was glorious, the weather warm but with a cooling breeze – a perfect day.  When I changed shoes it was like rediscovering feet again.  After there were burgers in a park and an early night generally buzzing with the sense of exhausted satisfaction.

I’m also signed up to fundraise for it.

If you’ve got this far in this blog then a) good on you!  Thank you!  But also b) you’ll notice that unlike when I usually raise money for charity, I’ve left the important bit – an appeal to donations – to the bottom of this post.  This is because many lovely, kind and generous people donated last year to Macmillan Cancer Support, and the event got cancelled and well… here we are again.

Does this change the fact that Macmillan is an awesome cause?  Not even slightly.  As well as research into cancer care, the Macmillan nurses in hospitals are also experts in palliative care, and I will be forever grateful to the lady who helped my Gran through her final days of life – as well as supported the family as a whole.  The fact that I’m gonna go for a long run despite bloody Storm bloody Charlotte is largely irrelevant to the excellence of the work they do – and it is excellent.  Every year I do something small but mildly taxing for charity – although of all the Swimathons and runs and stuff that require months of training and hours of dribbling on a sofa after, that month without chocolate a few years ago was true torment.  Every year I ask people to donate, always for a good cause, but let’s face it, 2020 was a stinker.  It stank.

If you can give to Macmillan Cancer Support, please do.  It really is an awesome cause and though my gratitude is huge, it’s more important that out there are families currently going through some of the worst experiences of their lives who will be supported at the worst possible time by this incredible organisation.

And if you can’t, that’s also cool.  Spring is coming, vaccines are on the way, and one day too, all this will pass and we will meet again in busy halls and crowds of people, sharing cake and together with friends at last.  And I cannot wait to see you there.