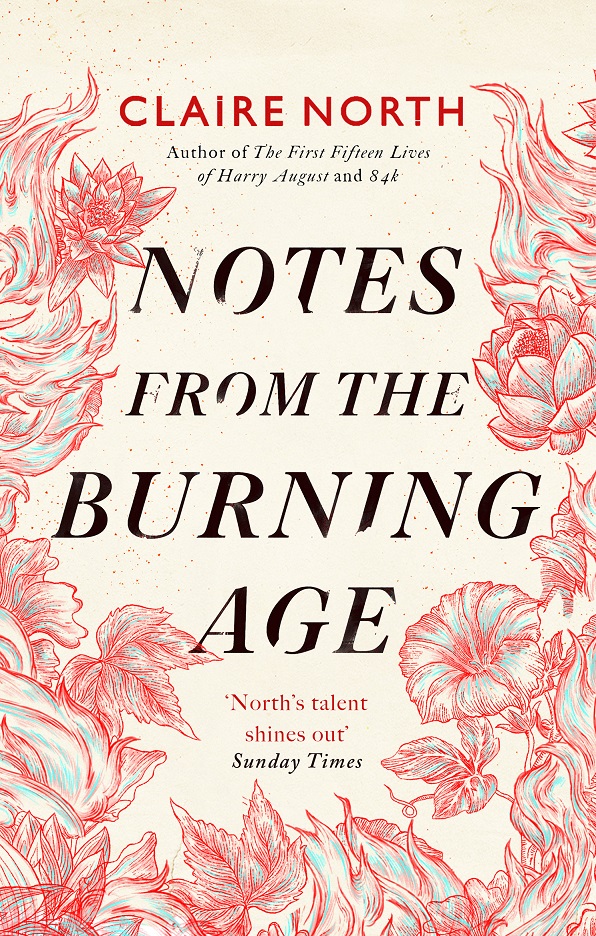 Notes From the Burning Age is now out in the UK and US in hardback, ebook and audio!  Hurrah!

As a reminder, this one is a semi-sorta spy-thriller set in a future environmentalist’s utopia in which we’ve basically got everything right, up to the point where that starts to be threatened by conspiracy and war.  I think of it as one of my more huggable books of recent years, full of reasonably alright people trying to do their best for a reasonably alright world, but I have been informed that it is also a post-apocalyptic utopian thriller.  More importantly, it has an utterly gorgeous cover by Siobhan Hooper and Leo Nickolls that is basically a work of art in its own right.

There’s a lot of lovely reviews in, but one of the possibly nicest is from Jason Sheehan at NPR and has me beaming ear-to-ear – “In ‘Notes From The Burning Age,’ We’re The Ones On Fire”.  There’s also lovely reviews from Publisher’s Weekly and Locus, as well as many other awesome outlets, which is wonderful and for all of which, I am ridiculously grateful and pleased.

If you’re in the UK, from next week there should be signed copies with both Goldsboro Books and Forbidden Planet.  Apologies it hasn’t happened this week – I’m still waiting to be released from isolation by the NHS after getting pinged by the Covid app.  (All tests continue to be negative, although my goodness sticking a stick up my nose suuuccckkks.  Still, I’ve had weirder publication days – the day Minority Council published I spent wiring up LED batons at the back of a theatre while naked people flopped around in goo around me, before going to a Butlins for an SF convention.  Anyway…)

If you enjoy your audiobooks – and why wouldn’t you? – the always wonderful Peter Kenny is back on narrative duties, making all the words better as is his wont.

As always, I really hope you enjoy the book, and stay safe during this ongoing barmy time!