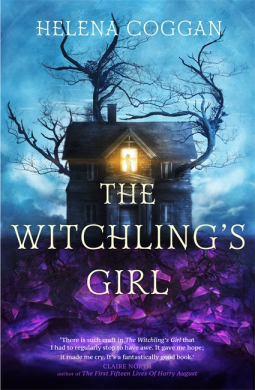 Bias disclaimer: I have known the author of The Witchling’s Girl, Helena Coggan, since she was a teenager starting out in her writing adventures.  We met on a very wet day in a cafe in the West End, after a mix-up in which I went to one of the ubiquitous chain of coffee shops on a street, and she went to an identical cafe in the same chain fifty yards down.  Technically I was there in my capacity as a Sagely Author With Grown-Up Wisdom, yet after many years I can attest that Helena needed my insight about as much as a kestrel needs flying lessons from a squid.

Writers are generally speaking, difficult to be around.  In an industry where every metric of success is wildly variable or utterly meagre (money, sales etc.) and every glimpse of self-worth is based on highly subjective measures (reviews, critical response, editorial input etc.) you won’t have to wait long for a writer to either start talking themselves up based on the slimmest of evidence (“I’m thinking Spielburg will direct!”) or start talking someone else down (“I mean, not their best was it?”)  Alas, despite my best efforts, I suffer from being a human-who-also-writes and as someone who was published when young, there was undoubtably a certain frisson of “damn, there goes my claim to fame” on realising that Helena was about to pull exactly the same trick I’d done as a teenager.  On reading her first book – The Catalyst – that frisson was increased with a shudder of “oh no, she’s got moves!” and I have finally come to understand how my Dad felt when I started beating him at chess – a mixture that is 80% astonishing pride to 20% “well damn”.

Yes, I’m biased.  But frankly, everyone who’s ever read a book ever is biased – it’s why reviews are so hard to get right, trying to find that delicate line between a stilted “well this is the plot” and an entirely subjective “aaaaggghhh I can’t abide present-tense third person!”  So having disclaimed the shit out of myself, lemme be clear that I was blown away by The Witchling’s Girl.

Firstly – it isn’t a bundle of laughs and if you’re looking for an uplifting tale of happy unicorns to see us through this gizzilionth lockdown, then maybe hang fire on this one until a few more folk have been vaccinated. But if you’re feeling emotionally… ok… then it is a story of incredible, beautiful quiet compassion and heartache in times of pain, of birth and death and growing up and growing old and finding love when the world itself seems set against you.  It isn’t about big heroes in big wars, but about the ones who are left behind, about ordinary humans dragged along by extraordinary events.  And even when things are at their worst, people still find hope, and purpose, all elevated by this beautiful writing style that immerses every sense in the story she tells.  It’s annoyingly good.  Frustratingly excellent.  Published in hardback tomorrow – January 7th, 2021!  And I am certain (99% thrilled, 1% teensy-weensy bit horrified – no one said being human was easy) that Helena is gonna just keep scribbling to even higher heights, and I cannot wait to see what she does next.