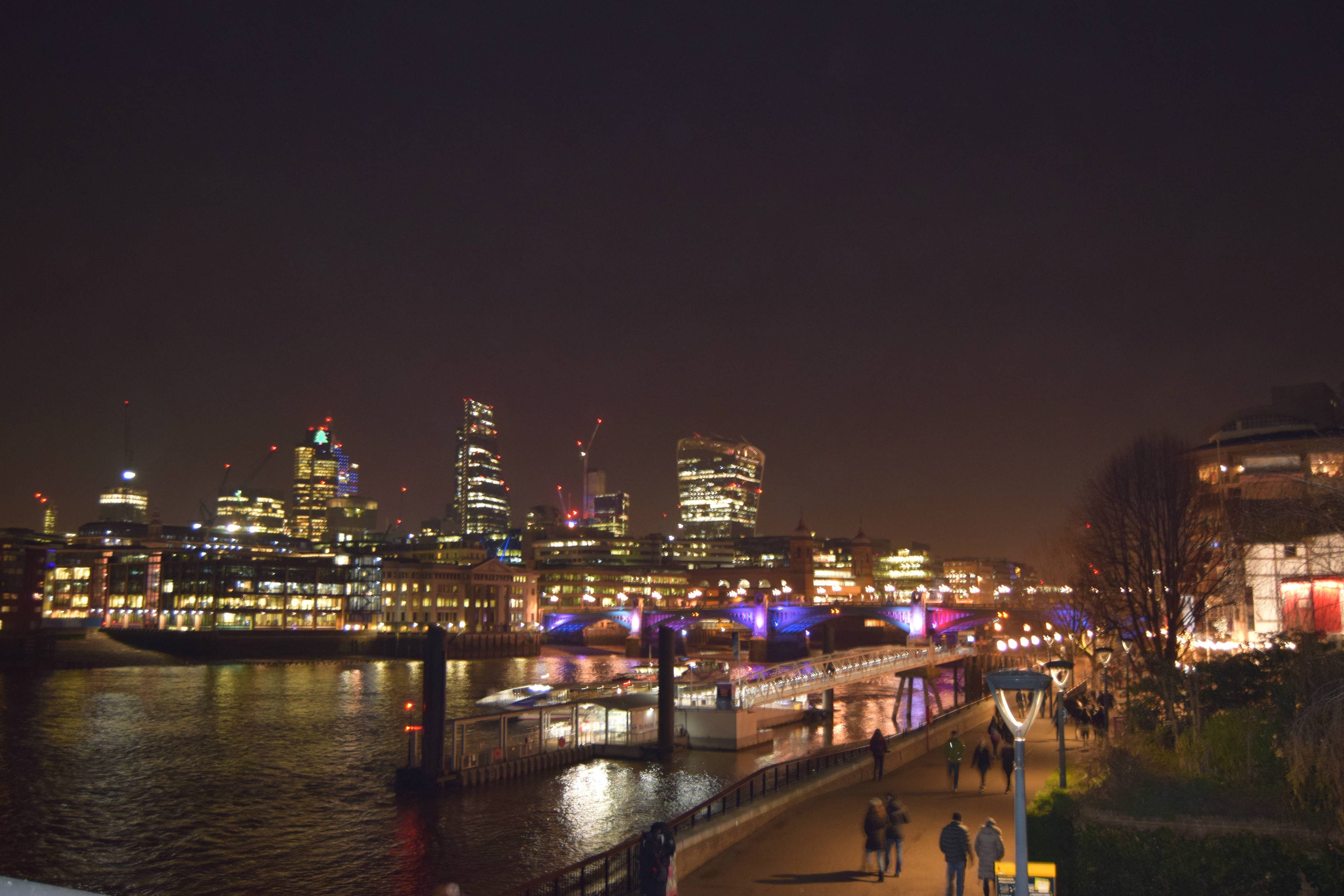 I am learning to run longer distances. Oh god it sucks. But sometimes it doesn’t! And sometimes it especially doesn’t because London has some great running routes if you know where to look….

(Most of these will be north London, as that’s where I primarily run.)

The river. The Thames Path can carry you practically from Oxford to the sea, but for a more London-tastic run it’ll do you sterling service in the city too. On the north bank I’ve covered Strawberry Hill-Richmond, beneath huge hanging trees and along wide gravel tracks. Back from the road are large estates of houses where kids play in the street and the neighbours all know your name; along the muddy isles of the Thames are boat and barges moored in their own lost communities. At Richmond I usually move onto the south side (you can also spend many hours happily jogging through the great green of Richmond Park) and head east. The route takes you past Kew Gardens, the wetlands centre at Barnes, breweries and pubs (some of which kindly offer free toilets to weary wanderers) all the way to Battersea and beyond. You pass schools, under bridges, around rowing clubs, beside a pagoda, round the back of a helipad and only a few times are forced inland by the absurd developments of the super-rich. As you head into the centre, the Shard grows higher and drifts along the horizon with the turn of the path, and the houses grow denser, taller, more modern, 1800s Chiswick town houses with raised steps against flooding, yielding to 1990s apartments before you hit the sudden wall of tourists and food vans at Westminster Bridge. Here your pace has to drop as you wiggle through the queues for hot dogs and the London Eye, but once through you can turn your eyes further east. You also no longer need to check the tides before you run; high tide between Richmond and Hammersmith means the south side in particular is prone to flooding, though between Mortlake and Hammersmith there’s a perfectly decent northern path along the river too, with a slightly different, quiet residential/mildly modern/highly wealthy character to the more pubby, spacious southern bank.

Past the National Theatre and food stalls towards the red-brick Oxo Tower, the path continues east. There are more crowds to contend with in the tighter cobbled streets around Borough Market, as well as the smell of some truly tempting cooking, followed by the many tourists to HMS Belfast and Ken’s Bollock – or City Hall, as it’s less colloquially known – but soon you’ll hit Tower Bridge and be faced with a choice – North or South bank? With your next easy easterly crossing being many miles away at the Greenwich foot tunnel, (Rotherhithe Tunnel is very much an affair for cars, though pedestrians can brave the fumes) this choice will determine potentially the next hour of your jog. Go south, and new developments will often push you inland, but stone-quiet streets and bursts of greenery will create a lovely place to jog, until you’re forced to wiggle (not unpleasantly) through the winding residential quays of Canada Water and down onto slightly less lovely main roads for the final leg to Cutty Sark. The north side offers much of the same fare as the south – converted warehouses and flashes of Georgian charm, modernist apartments and cobbled and tarmac streets alike – but has been developed a little longer and offers the slightly easier, better signposted route.

At Greenwich, you can choose to head south up the hill or east towards Woolwich. Alternatively, if you stayed north then before you even hit the Greenwich foot tunnel, your route will take you through the financial skyscrapers of Canary Wharf (horrendous at rush hour, eerily silent on a Sunday) either to the low homes and wide greenery of Mudchute, or further east again into the developments still evolving towards Silvertown and City Airport. At the Thames Barrier, a park of contoured green clings to the waters edge, but be prepared to move through a landscape at once new and shiny, wasted and bleak.

Either way, this route on the northern side plops you in the vicinity of one of London’s other grand waterways – the canals. From Limehouse basin you can choose to either head north-east up through Bow to Stratford, or north-west towards Victoria Park. If you go to Stratford, the Olympic park and surrounding waterways are a fascinating mix of old and new, from canal-boat raves to the industrial monument of Three Mill Island, to the London stadium and wiggling waterways of the Lee Valley. Crossing beneath motorways you can pass anything from improptu raves in wasteland nobbles of land, to families out for a picnic on a jut of green where water meets, and even heading through Bow the spur of Victoria Park is still nearby to usher you into a land of farmer’s markets, another pagoda, swans and playgrounds.

If you want to have your cake and eat it, you can turn south at Stratford through Hackney Wick, a still developing mass of new housing and old industrial workshops, and a few short minutes jog away reconnect with the beautiful green sprawl of Victoria Park, home to one of the best bonfire nights in London, framed by Georgian terraces and one of the largest green spaces in inner North London. At its southern lip you’ll rejoin the Regents canal on its journey up from Limehouse via the thin greenery of Mile End, and then head west. At London Fields you could divert into Hackney via Mare Street and Hackney Downs, or continue west to Islington. Continuing West, at Angel a famously long tunnel, the end just a pinprick of light, forces you onto the streets, and your pace will drop as you cross main roads and navigate round the stalls of Chapel Market, reconnecting with the path just before Caledonian Road. Here the canal carries you towards Camden past the swanky new development at Kings Cross, creating a mixture of the arty, the wealthy, the skint, the vegan, the smell of pot and the rattle of trains, all within a few hundred yards of each other. The old gasometres have been converted into fancy-pants new housing, but Camley Park nature reserve still stands beneath the rumble of the London-Paris train.

Your pace will drop again as you wiggle through Camden Lock, past the stands of burgers and halloumi, falafel and katsu curry, before you break out beneath the high, grand houses of Primrose Hill and Regents Park. If you feel barmy – I mean hearty – you can turn right at London Zoo and push up the hill all the way to Hampstead Heath, which one of the nicest places to run in London but is still my geographical nemesis. If you feel less barmy you can turn left instead, into the much flatter territory of Regent’s Park, and join the joggers, footballers and cricketers enjoying a spring evening in summer. A loop here can carry you past a theatre, round a lake prowled by long-necked herons, and through rose gardens, spitting you out anywhere between Baker Street, Euston Square and Camden.

Failing that – onwards! All along the canal route there’s only one real threat to your wellbeing – barmy cyclists. And they’re only really a problem in the east end, at rush hour, where they hurl themselves down too-narrow towpaths, pedestrians be damned.

At Lisson Grove the canal boat moorings have Colonised the land with trailing flowers and pots of green filling the concrete, but it’s not long before private moorings force you onto narrow pavements faced by looming mansions with huge, dark windows as you head towards Little Venice. Here you have a choice again – turn right towards Kensal Rise and the beginnings of suburban residential/post industrial canals, or left down to Paddington Station, which again you can jog through, ticketless, to head to Hyde Park.

A bit like Richmond, Victoria and Regents Parks, as well as Hampstead Heath, Hyde Park is a gift unto itself. You could loop round it for miles at a time and still see something new, or use it to hop off into the fancy western streets of Mayfair or Knightsbridge, perhaps letting them pull you back towards the river. Fields of long grass; gardens of carefully cultivated blooms; the Serpentine Lake, long shaded paths of overhanging plane trees – in summer the quieter areas chitter with insects, in winter it roars with the sound of the fair.

If you got off the canal at Hampstead, a number of other options present themselves. An extension of green carries you all the way to Hendon, and from there you can look for the Capital Ring path that circles the whole city. It’s also a short jog from Hampstead into Highgate – although for my money a significantly shorter jog if you’re coming down from Highgate, rather than climbing up from Hampstead. This leafy area of grandeur looms over the city below, and an abandoned railway line connects Highgate all the way down to Finsbury Park in a public path of overhanging green and empty platforms given over to nature and explorers. Cross Finsbury Park, and you can either head straight for a lap of Arsenal stadium, or detour a little east into the old reservoirs, now turned into a wetland centre, to add some distance to your route. Emerging from the reed-raised paths of the wetlands, it’s a short hop through back streets of Stanford Hill, past synagogue and bakery, to Clissold Park, following the tall spire of Stoke Newington Church if you’re struggling to get your bearings. Past the deer and goats in their pens, the kids in the paddling pool, you can make a choice – to cut west through the quiet, red brick leafy backstreets of Highbury to the fields, crowned in barbecue smoke during the summer and young footballers every weekend, or to head down the thin strip of the New River with its ducklings and sunbathing terrapins to Islington.

Winding up back at Islington, you can follow the main road south towards the centre of town again. Sure, it’s full of buses, it is at least downhill, and within a mile or so you can hit either the back streets of literary Bloomsbury, or the quiet lawyer-filled courtyards of the Inns of Court, beloved of historical film crews. From Greys Inn you can either wind back to Blackfriars via Middle Temple Inn, or to Waterloo and Covent Garden by Lincoln’s Inn, reconnecting again with the river, and if you’re anything like me, a well-deserved cake. Because seriously – you’ve jogged a long way already. CAKE. You totally deserve cake.