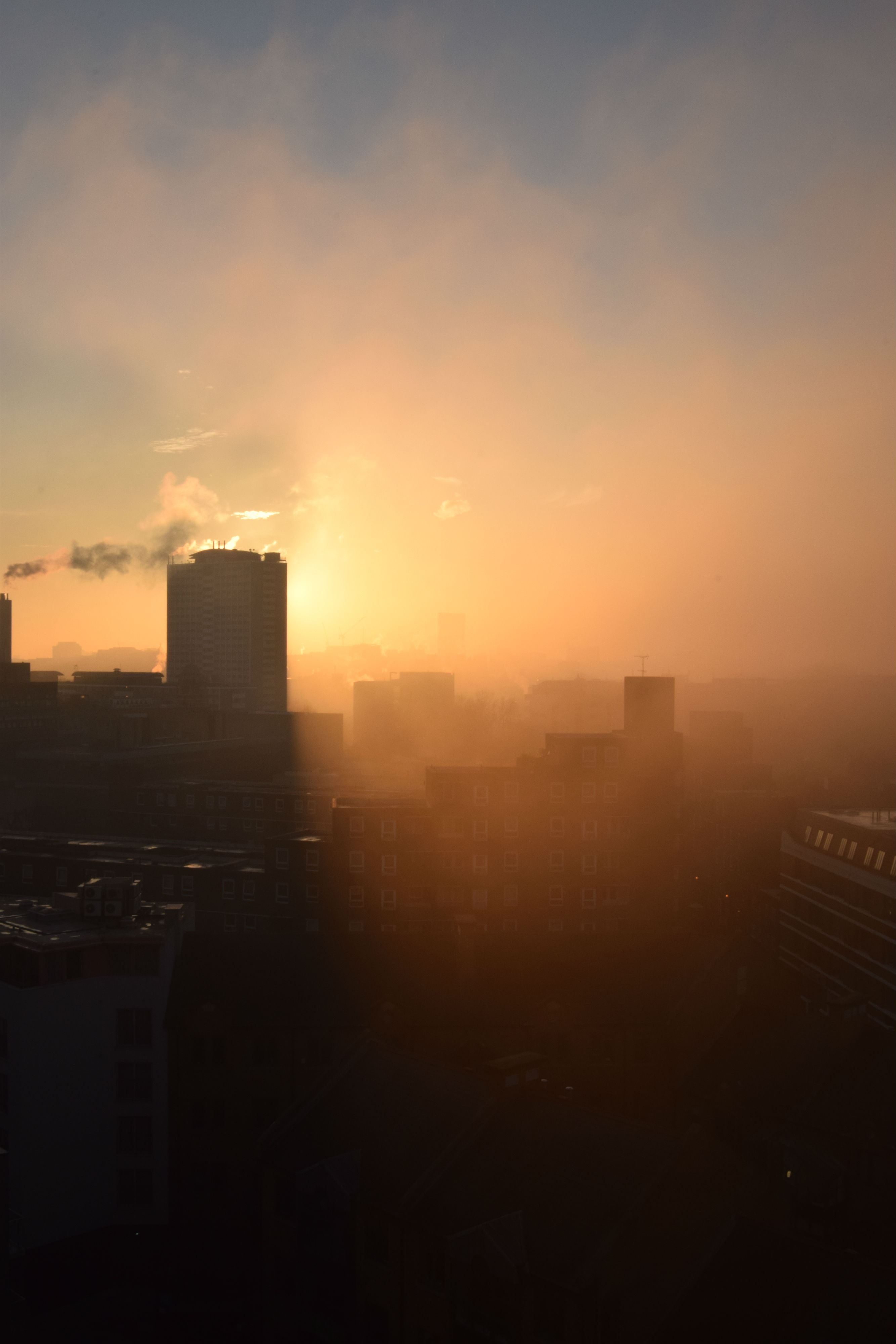 At dawn, you see the reflection of the sunlight off tall buildings, before you see the sun.  The sky is a powdery blue-grey, and distances seem odd.  Are those clouds overhead, or has the day simply not yet come into definition?

The light rises a little higher, cold, brilliant and yellow-white.  Sometimes it peeps out through thick cloud in solid streams, like shrapnel from a celestial bomb.  You can see it move, flow in and out across the paving stones as clouds skud overhead in high winds.  You still haven’t spotted the sun, but it’s making itself known.

Some mornings, it’s foggy.  Looking towards the Shard, that great big chunk of glass in the middle of London, low cloud surrounds the tip and makes contours vanish.  Then the light from the Shard is this spherical explosion hanging in the sky, until enough of the night is burnt away to reveal that in fact there isn’t a temporally frozen bomb of white going off by the river.

On foggy days, the sun as it finally becomes visible over the top of the houses, draws shadows not just on the ground, but in the air.  It’s so low that the shadows of trees and buildings are stretched out in smears of darkness through the air, creating shapes that seem almost solid enough to touch.

Then the sun rises higher, to its full noon-day brilliance of cold white that makes you flinch, even though you’re cold.  It bounces off windows and puddles, throws reflections from glass buildings back again onto the walls of neighbours, spins a narrow curve across the south of London and begins to set long before work is done.

Then a thunderburst, rain, pitter patter on the windows, a rush of wind pulling umbrellas inside out, darkness that makes you lose all sense of time – then a burst of light again, that brilliant washed-out brightness that makes the whole world feel new again – before the sun dips back behind the cloud.

In the evening haze, when dusk is shaded grey and wet, after-rain shining pink, you can walk through the streets of the city and see all the lights on in the offices, framing every shape and form that moves inside like characters moving through the screens of their story.  In this scene, on the fourth floor: a meeting goes badly.  Three windows further along, a different scene is played out for your delight – a woman shouting on the phone – while downstairs men and women stare into computers where mysterious data ripples and flows, waiting for a chance to put their coats on and head back into the gloom.  On such evenings, the cold air hits you hard in the chest as you rise up from the underground station, striking half-way up the escallator, and then out, into a sunset that is monochrome threaded with blue on the streets, not quite dark enough yet for the sodium streetlamps to count, and brilliant red and pink and gold and silver overhead.

For a few moments, the sun peeps out from beneath the clouds, and suddenly there is a last flash of illumination above and below, shadows stretched for miles across the city and the belly of the sky lit up scarlet and gold.  Then it vanishes, so fast you can watch it sink, a distant circle which is, at the last, little brighter than the moon.