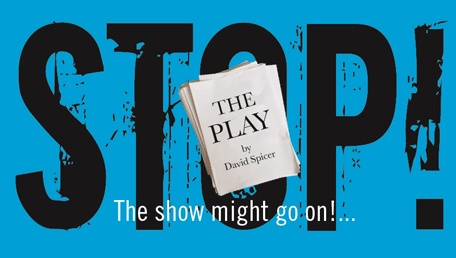 I’m lighting a play at the moment!  Actually, I’ve been working on it for a while, but tomorrow we go into fit-up for it at Trafalgar Studios and I’ve printed off the plans and the colour call and put my folder in order and done a pre-plot on the ETC offline-editor (because that never goes wrong) and all things considered….

… I am one prepped lighting designer.  Basically.

The play in question is called Stop! The Play.  It’s a play in two parts.  In the first half, we see actors rehearsing for a play.  A play that I think I can safely describe as… pretentious.  As rehearsals go on, the writer begins to send in more and more re-writes, and the realisation dawns upon his cast that they have no idea what they’re doing.  In the second half, we see the play itself on the opening night, and as I think the phrase goes, hilarity ensues…

A confession: I was cautious when I first heard about this one.  Do we really need, I wondered, another play about making a play?  Noises Off has set the bar pretty damn high for that one, and if I feel skeptical about writers who write books about the agony of being writers, a similar vibe is extended towards theatre-makers who make plays about theatre-making.

But, egged on by the director (who may actually be a superhuman being, hard to say…) I attended a reading.  You know how it feels when your face hurts because you’ve laughed too much?  My face was in agony.  It is pure and simple delightful and hilarious, and in so many ways that hurt (in a comic vein), true.

I light a great many more plays than I actually talk about on this blog.  Partly this is because when I’m lighting, I’m usually too busy to use words that don’t involve the phrase, ‘at 50… okay, update that to track break nested… can we get a look at the scroller on the stage right pipe end please….’ and other not-so-helpful manifestations of my technical nature.

Sometimes I don’t talk about plays because they’re not on for very long, and by the time I’ve finished rigging, plotting and focusing they’re practically finished anyway.  And sometimes – rarely – I don’t talk about plays because they’re bad.  They’re just plain bad.  For every eight stonking productions you work on, there’s usually one or two that are paid in taxes to the Gods of Stupid.  If I frown to hear the words ‘I’ve got a fabulous idea!’ that frown has been earned through years of the sentiment that follows being: ‘we’ve got no budget and no time to achieve it, and we open in half an hour, but I still think it’d be really worth you guys trying to make it happen!’

Stop! The Play is none of that.  The cast are excellent, the stage manager is a noble bastion of biscuits and calm, and the director is that rare and blessed combination of both the immortal phrase ‘let’s try it’ and the equally important and far-more overlooked phrase, ‘it’s not working, let’s go back to something simple’.  Even if all of this were not true, the script itself is a delight, though with a lighting rig at 2.7m Christ knows what it’ll look like on opening night.

If you’re in London looking for a little bit of joy: go see Stop!