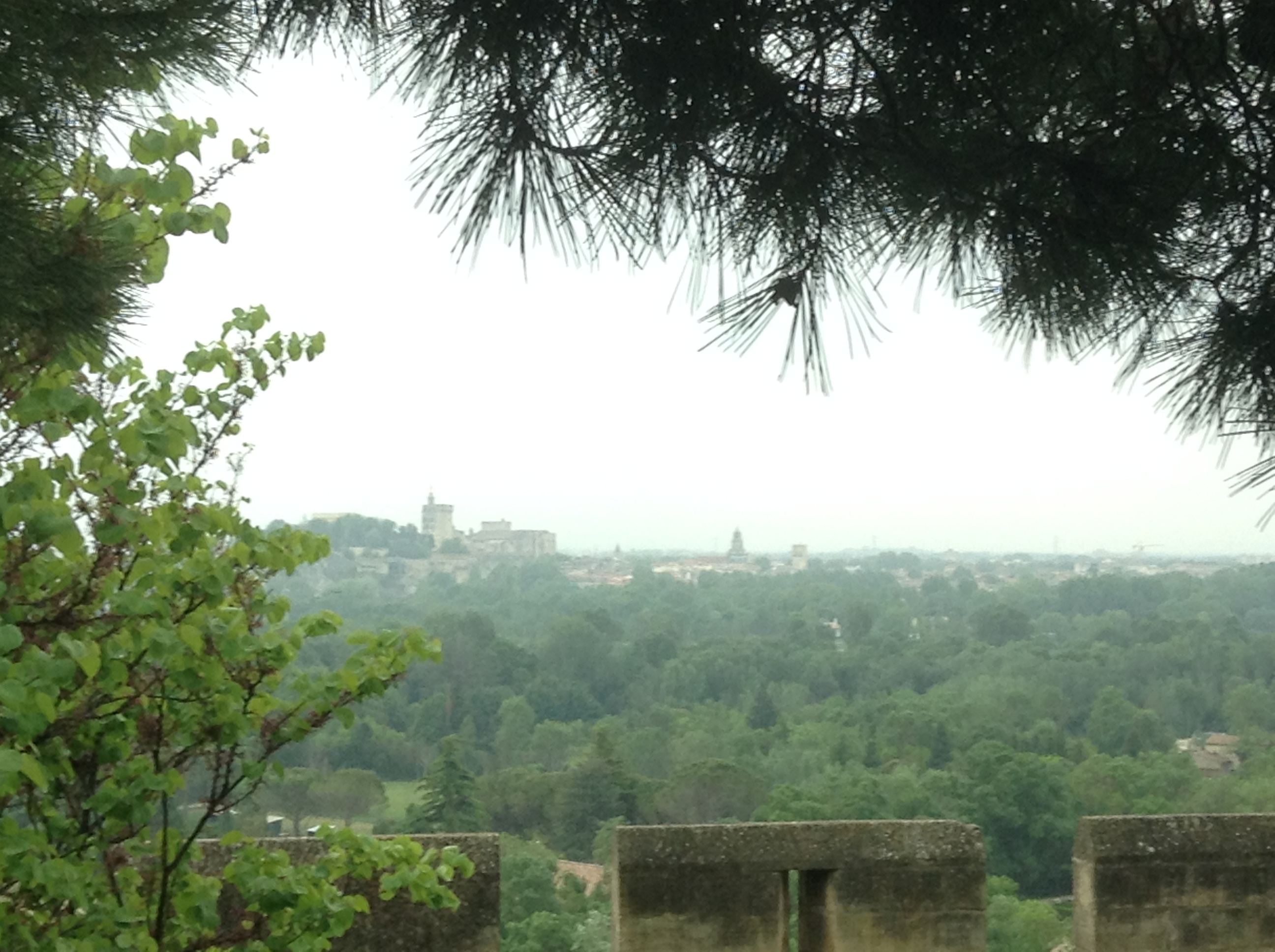 I get a bit of piss-taking from my mates when I tell them I’m going on holiday.  Apparently ‘doing taxes’ and ‘sorting out the flat’ and ‘writing a book’ don’t count as ‘holiday’ to which I say… you guys clearly don’t take relaxing seriously enough.

This year, however, I’m totally acing the holiday thing in a way which even my friends have to admit is proper holiday-like.  There’s gonna be some time in America later this year to see my partner’s family, but a few weeks ago there was ALSO four days in Avignon!  Take that, rest and relaxation.

That said, let’s begin with the not-relaxing parts.

We went to Avignon by train.  In the grand scheme of things, taking the train to Avignon from London is arguably only a few hours longer than flying.  Sure, between take-off and landing the flight is barely worth sitting down for, but there’s so much time wasted getting to airports and clearing customs and blurgh, other dull bits, that in reality you’re almost better off just sauntering up to St. Pancras at 7.15 a.m. one morning and catching the Eurostar.  By 3.30 p.m. in the afternoon, you’re at Avignon TGV and either about to change to the shuttle train to the centre of town, or giving a highly Gallic shrug and taking the bus the last few yards to the centre of the city.  More to the point, I love trains.  Hands up anyone who doubts that?  Go read my stuff.  I LOVE trains.  I love watching dull Northern France become pretty Southern France.  I love the feeling of actual acceleration – I love the fact that the TGV actually has some legroom.  I love the hustle of stations; I love the sounds of people on the trains, who generally speaking are about 60% less miserable than people on planes.  Train is an amazing way to travel.

But… must also be said… the Paris Metro smells of pee.  As a Londoner, I have the right to complain endlessly about the London Underground.  (If you are not a Londoner, you do not have this right.  If you try and do not live here, Londoners will hurt you.  It’s just a thing.)  But the Underground, for all its failings, doesn’t smell consistently of urine.  Every train isn’t actually so cloudy with graffiti and scratched glass that you can’t see through the window, and you’re not guaranteed to be constantly shoved through the ticket barrier by aggressive men trying to jump their fares my mollesting you.  Gare du Nord and Gare du Lyon are horrid, surrounded by fairly unimpressive streets selling baguettes so stiff that by the time you’ve chewed through them, the energy lost in jaw work probably exceeds the energy gained from digestion.  Paris… there’s some work to be done here…

Other stressful things.  We had booked (we being me and my Mum – this was a rare family thing) a hotel room in the centre of Avignon with twin beds.  On arriving we were informed that we were in a double.  When I suggested that booking a twin room meant getting twin beds, the receptionist shook her head.  ‘No no no,’ she exclaimed.  ‘A twin room is more of a request, than it is a demand.’  A few days later we were moved, but imagine my unimpressed face on the way…

No one in France ever seems pleased to see you!  Except for the guys who run the not-very-good tourist restaurants that specialise in not-very-interesting food for the tourists.  And even they run out of interest pretty fast.  I think the prize for the most-unhappy-to-see-you person in all of France went to the woman in the Van Gogh Foundation in Arles.

“We have one painting by Van Gogh,” she explained wearily, first to an American tourist, then a Norwegian.  “No – there are no more paintings here by Van Gogh.”

“But where are they?” asked the Norwegian.

“In other museums,” she replied, her eyes the reflective silver pools of a fish long-since clubbed to death then thrown back into an icy sea for being not worth the meat.  “We are the Van Gogh Foundation, but there are no more Van Goghs in Arles.”

Conversely, the person who was happiest to see us was up a small hill in the new town of Avignon.  New in that it was built after 1300; still, never-the-less, a picturesque maze of winding streets and cobbled lanes, of French municipal cleanliness and restaurants that serve lunch from 12.30-2 p.m. and not a minute before, not a minute later, you’d better just go hungry.

Never-the-less, up this hill was a fortified monastery, built in the days when the River Rhone marked the boarder between France and her various Ducal enemies.  Over the years the monastery had suffered variously from reformations and revolutions, and now much of its grounds were ruinous, but within those crumbled stones an artist had come along and decided to make something much more spectacular with trailing roses, fields of lavender, olive groves framed with blue irises, overhanging wisteria and fragrant rosemary.

“Take your time; just breathe it in!” exclaimed the man behind the reception desk, handing us a map.  It was raining that day, but we’d walked to the castle-monastery along a canal, and were willing to take our time to enjoy nature.  How strange it was, we mused, Londoners to our core, that not half a mile away was a bustling city, and yet here, after barely an amble, you could feel like you were in another, rural land.

“Crusty jugglers!” was our other big reaction, as back on the Avignon side of the river we looked down from the battlements of the Palais du Papes, to observe some very annoying human statues in the square below.  “The greater good…” may also have been intoned, and there, dear friends, if you are not singing along with the Hot Fuzz references may I take this opportunity to suggest you go watch the film immediately, because without it this entire paragraph basically makes no sense.  To the rest of you: I raise my cornetto in salute, oh my sisters….

A little bit of contextual history….

So for a wee while, Avignon was the home of the Popes.  Rome, for all it had some nice press during Augustus’ time, has spent most of the last two thousand years being a dive of inequity, squalor and distress, and it makes sense therefore that a lot of the early Popes spent time wandering around Europe.  Avignon was a handy place to set up home for a while, and for a brief while there was even a Papal schism in which two competing Popes glowered at each other, one from Rome, the other from Avignon.  And where there’s Popes, there’s construction, and this being the middle ages, when religion and socio-economic-politics were basically the same thing (see: the Crusades) you don’t just get a cushy manor house with a chapel round back.  Oh no.  You get a big fuck-off castle of death.  And as a French king on the other side of the Rhone, you then also build a rival big fuck-off castle of death, because the Cold War wasn’t actually a new idea.

Wandering around the Palais, while the military historian inside me was very excited by much of what I saw, I confess the atheist found herself getting increasingly militant.  I think it was the display detailing what the Popes spent their vasty wealth on during their time inhabiting this city – a heady mixture of household goods, furnishings, war and building works.  Nothing about the poor.  Not squat.  I mean, sure, yes, the Popes of the 1200s aren’t necessarily a great example of all the good that organised social movements can bestow upon this world, but there’s something about the fusion of spiritual grandeur and military-political statement in the Palais du Papes that should by all rights bring the cynic out.  Castles are after all, pretty damn cynical.

Other relevant bits of history: the Romans were a thing in that area for a while.  This is especially noticeable in Arles.  We went to Arles without a streetmap, but this was fine.  ‘Find giant Roman coliseum,’ we intoned.  ‘Head north from there to find the station.  Head south and west to find everything else.  If lost, look again for giant Roman coliseum and try again.’  Easy, right?

The coliseum is still in use, many thousands of years later.  However that use is often bull-fighting, which brings out the ambivalent in me.  Call me culturally repressed, but I sorta feel there are other ways for men to strut in a manly way without slowly killing an innocent enraged animal that never meant them any harm.  Go: discuss.

I think that’s pretty much it.  Time flew by, I ate… actually, fewer chocolate crepes than I’d been aiming for, but I guess we got distracted… and we returned if not necessarily rested, then certainly calmer in our minds, and a tiny weeny bit better at speaking French.