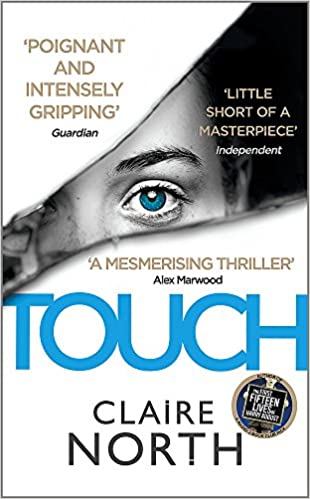 So I’ve said some stuff about Harry August; I should probably also take this moment to say a little about the book that follows it, Touch.

This whole pseudonym thing comes with a caveat.  Now that I’m Claire North, writing books in a certain genre, it would be a bit wacky to diverge to massively from that genre after only one novel.  Claire North, it turns out, is a very different writer from Kate Griffin.  One of the joys about writing the Matthew Swift series was that a whole universe was created which I could play with at will – alas, Claire North doesn’t have that luxury.  Thus, when my publisher bought Harry August, a big question mark immediately popped up about what I should write next.  Something that was within the style of Claire North, but was still interesting and different.

This question mark hovered over conversations for nearly eight months.

As a writer, it’s good to know where you’re going.  It’s one of the very few things that keeps you sane.  Don’t get me wrong – I’m not short on ideas, since there are so many juice footnotes in life just waiting to be exploded, but having a lot of funky ideas and finding the single idea which is the one, are two very different things.  And as I went back and forth with my editor, it became clear to both of us that sorting an something from the massive list was gonna be an adventure.

To keep myself calm and sane, I did a lot of theatre in those months.  I think I lit something ridiculous like seven shows in six months, which even for a lighting designer is bordering on daft.  Then, when winter was starting to arrive, I lit a show down at the Hoxton Courtyard (which has, if you’re wondering, one of the nicest in-house technical managers it has been my privilege to meet).  I remember walking one evening down New North Road to take another look at the venue (horribly low ceilings; nasty to rig) and even though it was barely 6 p.m., it was very dark.  There’s a park near the canal, a big patch of grubby grass really, and at night some lamps come on above the paths that cross it, and you can see cyclists and dog-walkers moving in and out of darkness as they pass by.  As they move, they seem to exist, and then don’t, somewhat like Heisenberg’s atoms in a cloud chamber, visible only when a photon strikes.  It was cold, it was wet, my shoes were leaking, my nose was red, and I had a terrible feeling that the height of the venue would not have increased in my absence.

Right there – that moment – the idea for Touch popped into my head.  Why?  I dunno.  Genuinely – no idea.  But the question which occurred was this: were there many books about possession?  Answer: sure, yes, there are plenty.  But I couldn’t off the top of my head think of any where the story was told, not from the point of view of people trying to exorcise a possessing power, or solve the mystery of who is possessed by what, but rather where the story is told from the point of view of the mind that is doing the possessing.  What would that be like?  Roaming from body to body, ignorant of who it is you’re inhabiting except by their credit cards and passport, not knowing their stories or what friends or families they might possess.  Does this body have a criminal record, is it married, does it have asthma, is it allergic to prawns?  You wouldn’t know.  A ghost, almost, drifting by touch from one host to the next, trying to live its life through the lives of other people – trying to live any sort of life whatsoever, really – any sort of life that might mean anything at all.  What would such a creature do with its time?  It would have no identity save for the identity of the bodies it stole.  It would own nothing of its own – at least, nothing which it wouldn’t lose when it eventually moved on from the body – nor have any family which it didn’t steal.  Having no access to the memories of the body it wore, most of its time would be spent desperately trying to find out the history of the skin it wears, or failing that, simply running, picking up a body and dumping it somewhere on the other side of the earth, where it would only be a vessel, to be worn until it became old, ill or uncomfortable.

By the time I reached the theatre, I was fairly sure about the ground rules of any such story, and within a few weeks I had the beginning of a story and the voice of a character to tell a story – a character with no body to call its own.  My then-editor wasn’t sure when I pitched it to her, but Christmas was coming and what’s Christmas for, really, if not writing books and eating mince pies?  Right?

It’s a hard book to write a blurb for.  For a start, how do you describe a protagonist who’s name became irrelevant a few hundred bodies ago, and who changes gender sometimes on an hourly basis?  The immortal words, ‘Kate Griffin’s being chased by demons, and she’s got a problem…’ … don’t really cut muster with Touch.  However, whatever solution my editor comes up with for that tricky little problem, I hope the actual words inside the cover are as fun to read as they were to write.