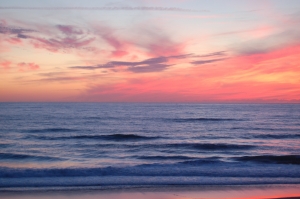 Is there any moment more distressing, I wonder, than that instant when you find yourself in the showers of the women’s changing room at your local swimming pool, in a state of some undress (as the old saying goes), only to run into the headmistress of your former primary school?

Sure, in principal, there’s nothing too terrifying about this.  She’s a woman… I’m a woman… my local public pool is, through geographical accident, the same pool where my primary school still sends its children for morning lessons, as indeed I was once sent twenty years ago.  These things happen, right?

But this is a woman who last saw me when I was 11 years old and who I lived in terror of for 7 years of my life.  Proper, primal terror too, since an infant going through their earliest years doesn’t have nuance in these things.  There’s no ‘on the one hand… on the other hand…’ about a child’s fear, it’s simple, all-consuming, all-immersive abject dread experienced in the face of someone older, presumably wiser (?) and absolutely more powerful than yourself.

In a spirit of honesty, I should declare certain things at this point.  Firstly, I cannot swear that it was my headmistress who I saw leading a gaggle of infants to their morning lesson, as I stood showering in the women’s changing room.  The moment came and the moment went, and my major psychological reaction of ‘arrrggghhhh!’ was entirely internal and mine.  I can, however, attest with 100% confidence that these children were from my old primary school, and were definitely being escorted by the lunch-lady who, when I was 8 years old, made me stand against the naughty wall of the school playground for spreading the malicious rumour that chalk was made out of thousands of years of compressed and fossilized fish bones.

Does bitterness still blaze in my heart, 19 years later, at this flagrant miscarriage of justice?  Do I still feel the burn of shame on my cheeks from the time I spent – probably 5 minutes, felt like an hour – stood against the naughty wall for all the other children to laugh at, and for what?  For being flipping right!

Do I still blaze with anger and indignation, though the millennium has turned and I have surely evolved into a sagelier, wiser creature of… you know… wisdom and that?

You bet I bloody do.

And more – more!  For the swimming pool where I suddenly found myself exposed and faced with this figure from my past, is that same swimming pool where every Wednesday morning at 9 a.m. I endured the ritual humiliation of being the useless asthmatic at the back of the class, paddling in the shallow end while clinging to a plastic float while leaner, meaner, more shark-like students ploughed up and down like creatures born to the seas.  Seventeen years it took me to realise that actually a) I’m an alright swimmer and more importantly b) I can enjoy this sport.  Seventeen years, so heavily was the memory etched of that day, when I was 9 years old and about to go to a music class with the rest of my year, when the headmistress of my school stopped myself and the two other weakest swimmers in the classroom door, and, in front of everyone, chastised us for our physical frailties, which caused her no end of problems as we held the rest of the class back.

Did all of this rush through my brain as these figures – now so much older, so much smaller! – from my past paraded through the women’s changing room in my local pool?  And was I suddenly beset with all manner of terrors and regrets, hard-wired into my still-evolving neural circuitry as all the tribulations of my youth came back to haunt me?

And sure, a great deal of my childhood was awesome, and a great deal of my education was blessed.  There were many teachers at both primary and secondary school who lifted me both academically, but also raised the bar of who I wanted to become, and how I learned to think.  But in that moment in the swimming pool showers, I was reminded with a terrifying, intense shock, just how deeply those formative years can bind themselves to a psyche.  I look back on many events in my youth with the rolled eyes and impatient sigh of retrospective experience, tutting and saying ‘so naive, so young…’ but that sentiment doesn’t necessarily bring with it regret.  I do not regret my mistakes per se, as so far none of them have cost me a limb, but rather I look on the errors of my youth as merely signposts on the way to who I am now.

However.  If I find it luxuriously easy to forgive myself, being only a child, I find it now a lot harder to forgive some of the adults who surrounded me.  Only a tiny few, certainly, and their crimes were only crimes of humanity which, as a child, it’s hard to remember adults suffer from too.  But the lunch-lady who made me stand against the naughty wall for telling a truth… the swimming teacher who exclaimed that I was no good, and nothing could be done with me… the headmistress who humiliated the physically weakest kids in front of the class… at the time these indignities were things that I took to myself, made a part of me, since surely all these faults had to be mine, as the child, and not the adult’s?  And these memories surface still violently and without much in the way of temperament as still smarting emotional scars.

I don’t say that as a child I should have been praised for my rubbish swimming stamina – which was rubbish.  Rather, I think of my PE teacher at secondary school – a terrifying-yet-awesome woman by the name of Miss Mitchell, who knew I would never be great a sport and would probably reel back in amazement to hear about all the martial arts, swimming or running that’s dogged my recent life.  Never-the-less, the truth of the matter was that at secondary school, I wasn’t ever going to be much to write home about on the hockey field, but she still found a way to engage me, ways to keep me involved and still love games, even when I was fairly rubbish.  In hockey, for example, she realised that I had the practical skills of a peeled potato, but a decent tactical brain, and when at parents evening she smiled benignly at my parents and said, “The thing about Catherine is, she’s great at knowing where the ball will be… but not very good at getting there…” I nearly burst with youthful pride.  In that moment, I was being assessed and found wanting – but I was being looked at for myself, for the skills I had and those I didn’t.  I was a rounded human being, not a child any more.

Whereas, standing exposed and shivering in the showers at my local swimming pool, I felt again the horror of being a seven year old, my personality, failures and achievements defined almost entirely by things that got on my teacher’s nerves, and how much trouble I might cause, rather than by who I was, or what I might become.