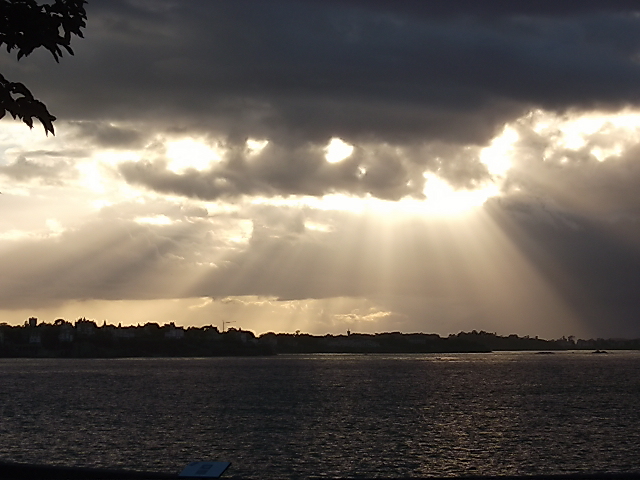 We had some ferry vouchers.  I’d love to say that we thought long and hard about where to go, but the simple truth of the matter is: we’d inherited some ferry vouchers.  Which were also good for several nights stay at ‘partner hotels’.  The full extent of the transaction with the travel agent was, therefore, ‘here’s the value of what we’ve got… what can we do?’

What it turned out we could do, was a ferry ride to St. Malo, three days in France, and a ferry ride back.  We weren’t gonna say no.

A scribbler should be able to paint a picture using words.  I hope I can.  However… a lighting designer is also trained to use pictures to tell a story, and I figure that the blog may as well be the best of all worlds…

We caught the ferry from Portsmouth.  Portsmouth… doesn’t necessarily have a huge amount to recommend it.  I mean, I’m sure it has some stuff to recommend it, everywhere does, it’s simply that, as a traveller heading to the port, you have to speculate quite liberally as to what that stuff might be, and inspiration doesn’t freely knock.  We arrived paranoid-early at the ferry terminal, which feels a lot like an airport terminal but quiet.  So very, very quiet.  We were foot passengers, and we sat on long rows of empty chairs opposite the one hushed coffee shop, watching car passengers line neatly up in aisles ready to board, and wondered if were the only foot passengers  in the world.  By the time we were rushed through customs – no one particularly interested in who we were, probably on the basis that we were leaving – it was dark, and the ferry seemed this giant, slightly intimidating wall sat against the quay, the smell of petrol and car fumes drifting out of it like old beer from a brewery.

Step inside, however, and you were immediately plunged into a hall of commerce.  Neon pink seemed to be the fashionable signage of the moment, pointing you towards Casino, Games Arcade, Saloon, Bar, Café, Restaurant, Brasserie, Lounge, Cinema and endless shops selling dire kitsch in between.  The ferry was undeniably French, even in English waters.  The power sockets were French, the announcements were in French, everything about it immediately required that we try and recall what little francais we had available.  (I quit studying French when I was 13, having been informed by my language teacher that I really wasn’t ever going to be any good.)  Announcements rang out down the halls asking car drivers to silence their alarms, and suggesting that any ladies bored on the crossing avail themselves of a manicure.  The food was dire; the view from the stern of the ship as we pulled out into the night was incredible.

It’s been a long time since I took a ferry, but I remembered loving it as a child and loved it again the night we sailed from Portsmouth.  The sea re-defines vastness, even when the strait of water in particular isn’t especially vast.  The Isle of Wight is a strange pattern of darkness and light as we sail from port, the sky fills fast with stars and the air is cold right off the water.  Leaving Portsmouth, it becomes very easy to imagine how frightening – and exciting – the seas must have been before the days of propeller engines and radar.

We had a cabin.  The sea was calm, but even so in the middle of the night odd swells would bump you awake and then soothe you back to sleep.  The engine hum was constant, but unlike trains or planes, didn’t intrude with irregularity or an offensive pitch.  As with all transport that claims you can sleep in it, the bed was uncomfortable, but that was fine – I’d have been disappointed if it was anything else, or if I’d woken in the morning without aches throughout my body.  Aches are how you know you’ve travelled.

Aaaah… waking in the morning.  The ticket informed us we reached St. Malo at 8.10 a.m..  Turns out, this was local time.  Boat time, we arrived at 7.10 a.m. and the Captain, in an act of cheery brutality, decided it was worth letting the boat know the same at 6 a.m. on the dot.  If I’d had the strength to muster a hollow cry of ringing despair, I would’ve.  As it was, I didn’t, so couldn’t.

France is an hour ahead of Britain, even during summer time.  This essentially meant that at 8.10 a.m., the sun wasn’t quite up yet.  And it was pissing down.  Absolutely chucking it.  It proceeded to chuck it for precisely the amount of time it took us to get from the ferry, to the foot passenger terminal, from the terminal to the bus stop, from the bus stop to the hotel, and to close the bedroom door behind us.  At this magic moment, as we stood dripping on the floor, the rain stopped.  And stayed stopped for the rest of the trip.

St. Malo.  It’s got two bits – the old town, approximately five minutes walk from end to end, and the new town, which in proper French style sprawls out lazily from the sea, heading steadily inland until the obligatory maze of ringroads and retail parks that frames every self-respecting Northern French town like the moats of old.  In the second world war, St. Malo was bombed to bits, and then rebuilt almost exactly as it had been.  The result of this is an old town framed by fortifications – fortifications on land, fortifications at sea, ah Vauban, the military engineer, one of my heroes! – but filled of houses in the style of the 17th-19th centuries and made with the materials of the 1950s and 1960s.  As a result, it’s a slightly strange place, all medieval streets above modern carparks.

Moule frite are the culinary theme of the day.  Moule frite and crepes.  Aaaahh the crepes… any society which values nutella and butter that highly has gotta be a winner, say I.  There’s a small cathedral in the centre of town, a large monument to victims of war, and a lot of beaches.  The beaches are sandy, and run down to astonishingly calm, crystal-clear blue waters, punctuated by spikes of brown rock and jagged islands on which, yet again, Vauban shoved more fortifications against the perfidious English.  At low tide, causeways appear between the main island and these smaller outcrops; at high tide, these causeways vanish completely, as does several mile of beach and rock, so unless you’d actually walked along them the morning before you wouldn’t quite believe they were there.  There’s a massive maritime theme throughout the entire experience, from little souvenir shops selling bits of driftwood through to the recurring themes of poisson de jour.

Make no mistake, however; the place is a tourist trap, but it being the first week of October (and stunning outside) we didn’t care…