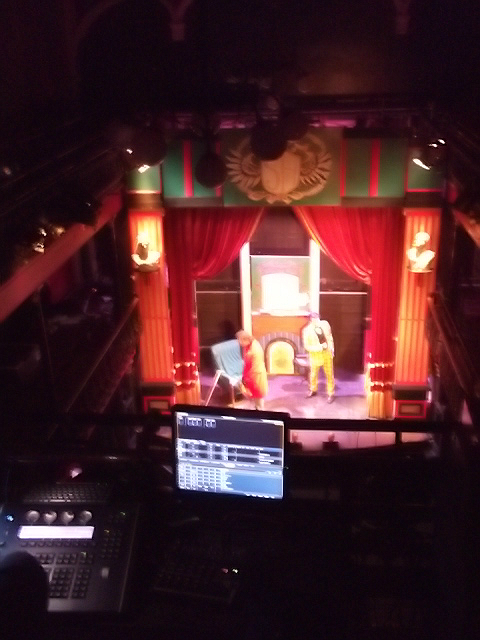 Ah summer is here.  And I am spending it… in tech.  In 4 techs in a row, in fact.  That’s four productions, all at different stages of development, and me flitting between them all, a rare continuity between otherwise completely disassociated events.

The coming weeks, for anyone wondering, looks like this:

Week 1:  collection of short plays grouped together into a passionate piece of modern writing about women and politics.  Women!  In fact.  It’s not just about women.  It’s about Women!  Possibly even the italic – women.  And no harm in that.  The feminist debate is one well worth having, and the plays are far more complicated than just going ‘doesn’t it suck to have boobs?’  Indeed, watching rehearsals probably made me more inclined to snort with derision when, shopping at the local Sainsburys, I spotted the magasine section, and was surprised to notice two sections ‘Men’s Leisure’ and ‘Women’s Household’.  There was, in case you’re wondering, no ‘Men’s Household’ and ‘Women’s Leisure’ and while it’s a petty thing to roll your eyes at, never-the-less an argument could be made for this little thing being symptomatic of an entire world of stupid.  The men’s magasines featured pictures of hearty people skiing, skateboarding, rollerblading, rock climbing and generally Doing Awesome.  The women’s magasines featured pictures of cupcakes.  I love cupcakes.  I like Doing Awesome too.  Anyway… just saying.

The rehearsals for Week 1, as I write, are finally at that point where they’re ready to start doing runs.  Runs are a godsend to lighting designers, because sure, bit-by-bit rehearsals can be interesting, and can give you a feel for stuff you’ve missed, but runs!  Runs allow you at last to tie things together, to get notes in your book as you actually grapple for the first time not only how the piece moves on its feet, but how everything flows.  Lighting spends a lot of its time helping things flow.  We push emotions subtly in different directions, help places change and atmospheres shift, and a sense of flow is a massive part of that job.

Week 2:  A play about the Holocaust.  Actually, it’s about a lot more than that, and is a far more complicated study than that summary gives it credit for, but once you realise that it’s about the Holocaust, there’s this big red sign in the corner of your eye that blazes ‘Holocaust’ and to a degree, the director’s job is almost to get away from that, so that when we do notice it it’s all the more powerful for not being numb.  They’re nearing the point where they can run.  They’re running sections.  Which again, is good, in that you can get a feel for what certain scenes will look like, and feel the intensity of the piece; but still, I wait with baited breath for a run as it’ll answer many questions still outstanding just in how the lighting should shape up.

Week 3:  A play about the recession.  This one’s a bit tricky too, I think, in that the dialogue feels natural right up to the point where you realise that it isn’t.  This puts LX in an awkward position – you can’t charge in with stark theatricality right off the cuff, but neither can you afford to get too embedded down in saying ‘now I shall make an office… now I shall make a train’ because before you know it, these locations are going to be burdens on the text, rather than enhancements.  Currently they’re in very early days of their rehearsals, and as an LD this is a slightly frustrating time.  Actors sit around and earnestly discuss their character’s histories.  Was X Buddhist at school?  Did Y say something nasty to Z when Z was 13?  Does W want a pay rise to buy a new car, or a TV?  And how will this impact the way X says the words, ‘tomorrow is Tuesday’?  It’s great stuff for actors, hopefully.  For an LD, it’s really not going to change the angle of my front light or give me a sense of cue timings.  Interesting though it may be.

Week 4:  A play not at all about Stanley Kubrick.  This is how it’s described on the flyer, and it’s right in many ways.  It’s a comedy, and based on everything I know of the company doing, it’s going to be difficult to light.  However: I haven’t yet seen a script.  Five weeks to go and I haven’t seen a script, and sure, I’m calm, I’m groovy, because at the end of the day I’m okay at working fast and have a fairly good grasp of what the director likes and doesn’t but still.  A script.  Dear god I want a script.  Tense?  Moi?  Not at all….

Week 5 I think I might just have a holiday…