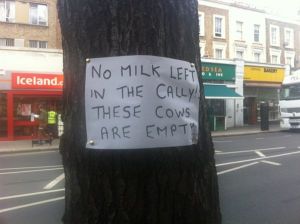 A few weeks ago, a program appeared on BBC 2 about ‘The Secret History of Our Streets’.  It’s part of an on-going series on the BBC charting the history of one or two interesting streets in London through the ages, looking at their social development, community history and modern appearance, and so on and so forth.  Caledonian Road was one of them.

Now… I know Cally Rd (as it’s known) very well.  I have many friends who live either on it, or near it, and have spent a lot of my time pounding up and down it, visiting the local library, and going swimming in the Cally Pool.  When, therefore, I saw on this documentary a landlord, who owns a huge amount of the street, who summarised his attitude towards the road as ‘if you have a cow, milk it’, I was naturally incensed.  He owns a vast number of bedsits, shops and tiny flats up and down the street, including one with a very good friend in it, for which he charges a low rent, and which he maintains in utterly unsanitary, squalid conditions.  By his own admittance, he rarely bothers to get planning permission for what he builds, creating blocks of tiny apartments within houses where you could barely squeeze a fly, and that fly would probably be ill from damp, mould and a lack of daylight by the time it left again.  His only avowed purpose is to make money out of the Caledonian Road and in the process, he is creating a squalid monopoly of shuttered shops and broken homes.

I have never before attacked an individual (unless we’re dealing with our glorious leaders and their political policies…) on this blog, but all that I said above is something he himself said, perfectly candidly, on camera for the BBC.  However!  In protest against this, the residents of the Cally Rd seem to be coming together.  It began with grafitti – ‘Please be quiet, we are sleeping in this death trap’ was scrawled on the pavement above an underground network of tiny, lightless flats which were built, illegally, beneath a restaurant.

Signs appeared on trees and lamps reading ‘No milk left in the Cally!  These cows are empty!’ and now the campaign is going electronic, with twitter (@CallyCows), blogs and local councillors finally getting involved. And as someone who has spent a lot of time on the Cally Rd, and has a lot of fondness for it, I figured it was a worthwhile use of my time, and this blog, to report it and spread the word!  If you have any time or affection for Cally Rd, and want to help it crawl back up from the squalor into which a great deal has sunk, or even if you have stories of rogue landlords and the horrors that they can inflict, and want to see their power overturned, then join the Cally Cows campaign!