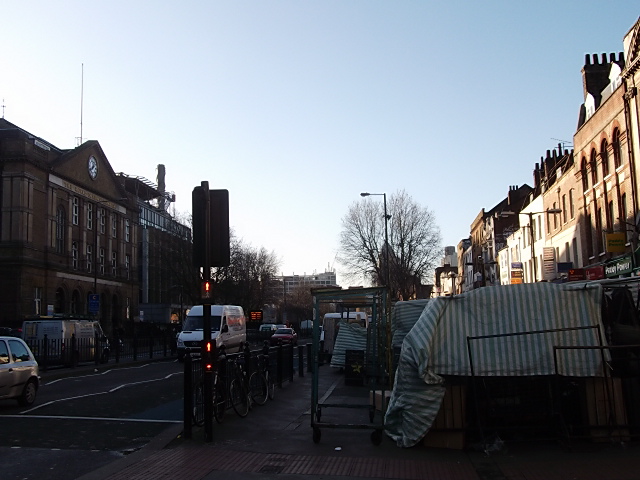 Whitechapel is an interesting place, with a history almost entirely defined in popular culture, by the Jack the Ripper murders.  Which is fair enough, in the sense that they did indeed happen there, but in light of the twenty first century, doesn’t really seem to to cover things.

I must admit, I lived near Whitechapel for best part of a year, but never really explored it properly, as my daily commute always pulled me the other way, towards Liverpool Street.  However, head from central London towards the East, and you can’t help but go through Whitechapel down the great artery of Commercial Road, or along Whitechapel Road if you’re heading towards Stratford and the Olympic Stadium.  The new Overground link between, of all places, Croydon and Highbury, also goes through Whitechapel and suddenly, it seems a whole new opportunity to explore the previously inaccessible wilds of Haggerstone, Hoxton, Shoreditch and Whitechapel are now only a fifteen minute trundle away.

Whitechapel itself is many things, but in my mind, what it mostly is is a place between worlds.  It’s rather intangible borders sit between Aldgate to the west, where the ‘City’ of bankers and lawyers stops in an almost visible line where twenty floor-tall glass and steel suddenly turns to two-storey brick and concrete, Bethnal Green to the North, Shadwell to the South, and Mile End in the east.  Architecturally speaking, it’s a place of good intentions gone astray.  In the late 1800s, all the places I’ve just described were linked with poverty, slums and the Victorian ‘rookery’ – a maze where one building flowed into another, and streets dissolved merely into drippy paths through someone’s bedroom to get to another person’s basement.  Then towards the end of the century, around, in fact, the time that Jack the Ripper was killing, the powers that be resolved to get rid of the slums of the East End, and demolished huge tracts of land.  In its place they put up neater, terraced houses and cottages, some of which you can still find in the streets off the fat main roads, tucked into corners.  They built great big red Peabody Estates, built to last a hundred years and doing well so far, and attempted to impose some sort of geographical order on the streetplan, thus leading to the occasional burst of well-kept regal greenland, such as Victoria Park, and the straight lines of streets going down to the river.  Unfortunately, during the Blitz, the East End was very heavily hit, and as large parts were destroyed, so the authorities of the 1950s also attempted to impose their will, creating classically uninhabitable, grimy council estates, a few of which are still clearly visible along Whitechapel’s northern borders, where it meets Hackney.  The collapse of the docklands in the 1970s and 80s did the area no favours either, until finally the arrival of the Docklands Light Railway and the redevelopment of the Isle of Dogs brought a degree of prosperity and even fashion back to the East End.  The DLR now trundles above the streets to Canary Wharf, which serves as a sort of opposing pole to the glass towers of the City itself, with Whitechapel something of an equator between them.

As with much of London, Whitechapel’s character is hugely international.  A very large Indian and Pakistani community is resident in the area, as can be spotted almost at once by the bustling street markets selling bright fabric and samosas, practically off the same tarpaulined stall.  The streets are almost invariably bustling, if not with people then definitely with traffic, and the coppers tend to patiently ignore the questionable shops selling knock-off mobile phones, perhaps having given up on supressing any kind of trade in the area whatsoever.  A large mosque sits just back from the even larger hospital, and various study centres surround it, along with, I was pleased to spot, a much smaller, more discrete synagogue, nestled in opposite a shop selling abayas and headscarves.

The East End is defined in popular culture, to a large degree by Eastenders, a soap whose merit I’ve never been able to fully comprehend.  If what little I’ve seen of Eastenders is anything to judge by, I find it hard to imagine the inhabitants of Whitechapel would recognise it, or be particularly impressed.  There is a long tradition of East End pride, which, as someone raised in Hackney, one of the largest east-London boroughs, I have a great deal of time in.  The East End is often messy, chaotic and jumbled, with polite Victorian cottages opposite great sprawling council estates, expensive suits sold next to greasy takeaways, but for my part I’ve always found that rather attractive.  Life should not be lived in social isolation, unaware of the rest of the world around you, and in Whitechapel, in its own small, often dubious and grubby way, life is very clearly lived to the full.