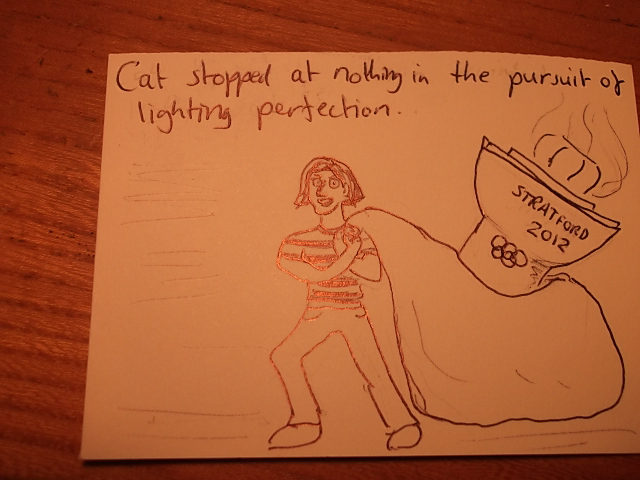 I very rarely blog about productions I’ve worked on.  I mean, I blog about the working, because it ranges from the exhausting to the occasionally comical, but you may have noticed, dear reader, that I very rarely mention the job itself by name, unless I think it’s truly stonking.

I also rarely invite people to come see my work.  As a lighting designer I’ve done a lot of shows where I’ve thought the lighting was quite nice, but not many people want to see a ‘quite nice’ use of backlighting.  Productions only work when every aspect is ticking along at the maximum – sound, lights, staging, direction, acting, design – if even one of these elements is dodgy then I tend to put my hands up and say ‘well, at least my part is alright’ and back away.  It’s a surprisingly hard thing ticking all these points at once, and I have yet to work on a single show where there wasn’t some weak element, even if that weakness is heavily disguised or happens only in the wings.

Therefore it’s with a sense of novelty that you find me turning round and saying… Tinderbox, by Lucy Kirkwood, in the Broadway Studios, Tooting, is a damn fine production that I’m really proud to have worked on.  The acting is superb, the design is stunning, the direction is sharp and clean, the sound is excellent and the lighting is… not too shoddy all things considered.

And there’s been a lot of things to consider, I hasten to add.

Tinderbox has been the reason why my blogging has been so scatty the last month or so.  It’s a ‘site specific’ project which is code for taking a venue entirely unsuitable for theatrical use, and turning it into a theatre.  It’s a massive challenge for anyone and as the lighting designer, I’ve spent as much time banging my head against the wall as actually calling up channels on a control desk.  There’s no power to speak of in the venue, and every second of every minute I spent in the space, I had a calculator in my pocket and would wonder with each increment of a fade, whether this would be The Watt Too Far.  There’s no infrastructure, no where to put lights, and a very tight budget to get the structure that you need.  Essentially, to make a site-specific project work, you have to build your space from the ground upwards, and when you’re a lighting crew of one, this is not particularly easy.

On the other hand, the venue we’re working in is scheduled for demolition so, whenever faced with any insurmountable problems of wiring or cabling or getting data to a rogue lamp, a cheerful cry of ‘knock a hole in it!’ would usually be raised by producers and designer.  “I get to do whatever I want!” the designer, Katie, exclaimed, gleefully waving a drill in one hand and glue gun in the other.  And she has done, essentially, whatever she wanted.  The space has been transformed and the set is, I genuinely think, a triumph. This is not the first time I’ve worked with Katie, and over the years our relationship has become as much about cake as art.  I can show you the link to some of her art…

While less cake-orientated than perhaps you might have hoped, the director was truly excellent throughout, although I don’t know if he has noticed his own habit of holding his head in his hands while trying to convince you that It’ll Be Alright, or if he realises just how much of the play he mouths along to during runs.  The acting company are absolutely brilliant, not a single weak link in the chain, and while I, as LD, can see all the problems with the lighting in that space, the more I look at it, the prouder I am of what we did achieve with our time, budget and resources.

So if you are in Tooting, and feel like an unlikely night out in an unusual place, then I heartily recommend Tinderbox.  I may even see you there…