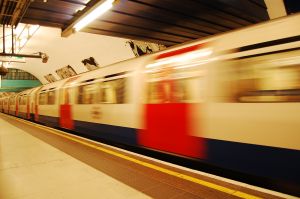 I very rarely change trains at Richmond, and have only been doing so because the rehearsals I’ve been attending on my ‘days off’ (note ironic quotation marks… did I mention this was the month from hell?) are on the far west of town, so horrifyingly far west, in fact, that you’re forced to take, deep breath… mainline trains to get there.  I know.  Radical stuff or what?

Richmond station itself hasn’t got much to recommend it, but by random luck, I’ve been passing through during the days when Ascot seems to be doing its thing, which has certainly livened things up in an unexpected way.

I know very little about Ascot.  I know there’s a racecourse there… I know it only really does Big Stuff once a year, and I know it’s considered something of a swish event.  That’s really the extent of my contact, apart from a brief period spent working near there as a lighting designer where, frankly, I didn’t see daylight let alone the sights, such as they are.

And it was in this vein, knowing so little as I did, that I fell into conversation with a lady sat next to me at Richmond, waiting for the train, about Ascot and what it was about, and why people felt the need to wear big hats there.  And frankly, I was surprised by the direction the conversation took.

I was surprised for many reasons.  Firstly I should say that the lady I was talking to was very approachable, friendly and nice, and didn’t mind my annoying questions a bit.  Secondly I should say that the sociology lecturers at the LSE always used to say that ‘class was dead’ which while a gross over-simplification, did then lend itself to a huge ramble about the nature of class and how it could no longer be measured by wealth or occupation.  Thirdly, and this is where the surprise really kicked in, what the very nice lady I was talking to about Ascot had to say, was something like this…

“Yes, I go – I mean, not today, of course.  Today is the last day of the meet and I think you can see, looking at some of these people that it’s well.. how can I put it… that it’s not quite the same kind of person who I like to… but that’s just me.  Of course some of these ladies are very elegant, very elegant indeed – I love your coat, by the way! – but others I mean, what can I say, really?  And when you think how much money they must have spent on that, well!  It’s really changed in the last five years.  Five years ago, the royal enclosure, it was the place to be, I mean, a sight to see, an absolute treat, all the very best, but now… my mother was divorced you see, so she wouldn’t have been allowed into the royal enclosure but these days… there were strict rules, no skirt shorter than here, no tattoos on your arms or anything like that and let me say, five years ago, well, David Beckham would not have been allowed inside but I suppose what’s happened is a sort of levelling.  A levelling of who goes and while that’s all very… but I’m just staying I wouldn’t go there now.  Absolutely it’s a class thing, absolutely, since you ask, and to be blunt.  It used to be a very specific class of people, very fine, excellent company, absolutely excellent company, particularly in the royal enclosure, I mean, such marvellous people, but it’s not the same any more, it used to just be a fun thing you did with your friends, you went to the races and drunk ridiculous amounts of champagne and it was the place to see and be seen but I don’t think so.  Not any more.”

At roughly this point my train arrived and I thanked this lady for her time and left feeling… well, a little shaken in my packet.  I am, as I think anyone can tell, a middle class bourgeois kinda girl.  I was raised in a comfortable environment and went to a posh girl’s school and while I probably spend too much time running for the bus and cursing like a lampie to ever be considered upper class, no one could ever pretend I was anything other than a middling urbanite lady. And while I don’t entirely agree that class is dead, I do believe that the old denominators of class have changed.  Accent no longer indicates wealth or employment, upbringing no longer guarantees position, borough no longer firmly pronounces financial status and so on… or so I thought.  But watching the crowd at Ascot, and listening to this lady talked, I began to realise that these grand social concepts – class in particular – lives as long as enough people think it do.  It didn’t prevent us having a conversation, it didn’t stop this lady, as I said, from being extremely approachable and friendly, but I was aware enough of it to edit my behaviour according to my surroundings, more than perhaps I might have otherwise done.  Wealth was on display as a thing to be proud of – champagne on the train! – the accents were RP with a hint of too much vowel, and I’m 99% confident that not one traveller on the Ascot service has spent much time eating kebab in Hackney.  So while I find the notion of class as a social identifier to be utterly horrifying, perhaps it’s more prevelant in our society than I had given it credit for… an uneasy thought to be left with on Richmond station…