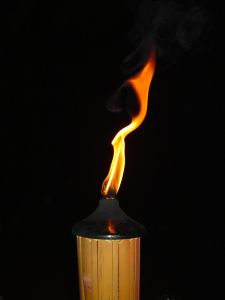 If anyone’s curious, I’m a very pasty white, the kind of white that you can only really get by taking three of the most pallid, rained-on genetic strains of Northern Europe and stirring them all together in a very small pot.  If asked to describe my DNA in pathetic fallacy form, it would be drizzle with a hint of smog.

I therefore stood out a bit when, over the last few days, I found myself lighting a showcase performance for an all-black theatre school based in London, where myself, the sound designer and stage manager (comprising between us the entire technical crew) found ourselves a triad of seagulls in a flock of crows.  Race is obviously enough something I’ve never really had to think about – like my slightly wishy washy feminism, I only really become aware of these social issues as and when I become directly affected by them, and having grown up in a society that is mostly Caucasian, even in Hackney, it’s just something I’ve never really had to think about.  I’ve not exactly been the victim of discrimination, apart from the odd moment when someone’s been rash enough to utter the fateful words ‘don’t to worry about that, babes, why trouble your little head’ at which point I tend to reply in pithy and forthright manner.  I’ve occasionally been the subject of a kind of inverse-ageism – ‘you’re too young to understand’ is a sentiment that infuriates and enrages, but on the plus side, I figure I’ll grow out of that one.  Point being, I’ve only maybe twice in my life felt aware of my race, both times on holiday in countries where being 5’11 and blond, while not unheard of, is if nothing else a bit of a conversation starter.

So it was with a certain degree of bumbling ‘oh really?’ that I got involved in this project.  I had, through a situation involving the Vietnamese society, a rehearsal that over-ran and a kitchen knife, lit the Afro-Caribbean Society’s show at LSE, but that was about as close as I’d come to involvement in a black community that is such a powerful part of London life.  And a few performances in, I still remain strangely ‘oh really?’ about the whole affair.  I suppose you could say I find myself divided between two causes, two different ways of looking at it, and they are these:
Argument the first: there are not enough black actors and actresses in theatre, and as you can tell by the fact that the entire technical team on the showcase were white, definitely not enough black technicians.  (By ‘enough’ I mean there are disproportionately low numbers compared to other professions – it’s not exactly something you can put a quota on.)

Society from the Stone Age onwards can be reasonably measured, it seems, in two ways – its ability to survive – food, water, heat – and its ability to get past survival onto the next thing – not beating each other up, justice, democracy, universal welfare, music, freedom of expression and of course running through all this, storytelling.  Mankind has always told stories about itself, it’s a vital part of forming a social identity, and therefore involving as many different communities as possible in the telling of stories is an excellent and necessary thing towards getting us lot to get on with each other and overcome the stupid bloody barriers between peoples, creeds, races and religions.  In this regard, theatre is great at just grabbing the imagination of the audience by the throat and shaking until the brain is knocked into active thought – great for reasons that would probably take too long to go over now, but start with emotional engagement and swell to an oratorical if occasionally didactic climax.  Therefore involving people who don’t necessarily have a universal voice in this sort of activity is an excellent and a good thing, and the advent of the all-black theatre school is something to be encouraged and applauded as allowing this under-represented aspect of society to get itself heard, hurrah.

That’ s argument the first.

Argument the second does a very similar thing – all the identity, story-telling stuff – but makes this reply – theatre is universal.  And if the ultimate aim of racial harmony is to achieve colour-blindness, then creating companies which are entirely black is no better than creating companies which are entirely white, an idea which is, let’s face it, dubious in this day and age of mingling and multiculturalism.  True racial harmony is the moment when we don’t bloody care if Hamlet is black or white or beige or shades of sepia, because let’s face it, grief and sorrow and joy and rage aren’t different feelings depending on the colour of the skin.  A white man isn’t going to have a hard time understanding a black man’s tears; a black man isn’t going to look at a white man’s grin and think ‘gee, if only I knew how to interpret this strange emotional signal’.  By very definition, the audience has to suspend belief when they go into a theatre, because unless we actually move them to Elsinore Castle they’re never going to have the ‘real’ Hamlet experience.  If audiences are already willing to be blind to the fact that the set is made of plywood and the sword is blunt, then surely it’s not too great a leap to ask for a little colour-blindness too?

Remember the inverse-ageism I had a problem with a few paragraphs back?  The reason I objected to that is the same that leaves me feeling a little uneasy now.  Sure, I haven’t yet experienced austere old age, (time will remedy this), nor have I had a broken leg, or leprosy, or fought in a war.  But lucky day, I’ve got an imagination on me, and can recognise sorrow and pain, appreciate horror in battle or weariness in time, and therefore not time, nor gender, nor race nor creed should be justifications to hold back the scope of comprehension, so long as imagination is there.

So yes…. I suppose the conclusion I’m forced to reach at the end of the day is this: that the bringing of theatre into communities where it’s not necessarily hugely celebrated yet can only be a good thing and worth cheering for.  But at all times, let it be remembered that you are not training a black or a white actor.  You’re just training actors.  The rest really shouldn’t matter.