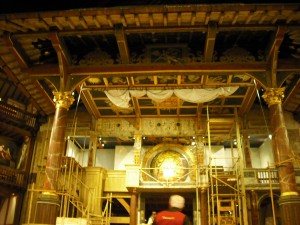 So, having done a very brief post on a play at Shakespeare’s Globe, I figured the next logical step was to do a post about the Globe itself.  First up, I really like this theatre.  I mean, speaking as someone who wants to spend the rest of my life doing lighting for the theatre, I doubt I’m ever going to go there as anything other than an audience member, but as an audience member, it’s a fantastic place to be.

The history as I vaguely remember it is something like this… theatre built in Elizabethan times, nabbed a reputation for a place to see Shakespeare (although I have a sneaky suspicion that there was a neighbouring theatre, the Rose, which has equal if not better claim to this reputation and academics are cringing… however, it’s not my period and all this stuff is pretty much postcard level history…) – burnt to the ground by cannons being fired as part of a performance of Henry VIII, owing to its straw roof and, as I’m sure many stage managers would smugly add, a certain disregard for the conventions of health and safety.  For a few hundred years nothing much happened, until some thirty-something years ago a gentleman by the name of Sam Wanamaker decided to try and ressurect the Globe in all its traditional Tudor glory.  Therein followed a fairly standard London Development cliche, involving bureaucracy, fiddling, back and forward local council bickering and finally some rather grudging building permission.  From that cliche came the next cliche of all London building projects, towit constant cash problems and the Great British Builder gag, this last probably not helped, but certainly made interesting, by the commitment to using traditional materials and techniques for as much of the construction as was possible.  Finally, after much angst, the Globe was opened, and stands now on the South Bank, as good a guessed mimic of its Elizabethan predecessor, from the straw roof (+ sprinklers) to the wooden balconies and ground level exposed to the sky.  I have a sneaky suspicion that I may have been there for one of the first plays ever shown at the Globe… suspicion only, because I was, I think, 10 years old at the time, and while I remember loving every second of Henry V, the extensive speeches and dinner that followed after are a bit of a blur.  Do not get the impression, by the by, that my family is exactly known for patronizing the arts; but we do know people who do and sometimes this leads to such bizarre occurrences as described above.

Anyhow, whether or not my suspicions are correct, the Globe first really entered my attention when I was at secondary school, courtesy of a highly cultured friend who, for the sake of anonymity, we’ll call Galadriel.  After an initial dubious encounter involving a jazz production of Macbeth, a thunderstorm and a stinking cold, my love for the Globe was sealed by spending a warm, cheap and surprisingly un-rainy summer watching Richard II and Twelfth Night.  While the Globe can be a bit hit and miss with some of its stuff, when it is good, it is absolutely wonderful, and being a groundling, inches away from the stage and in full cover of the same light that hits the actors is a theatre experience like none other.  I remember being absolutely absorbed by a production of Edward II, and laughing so hard that my face ached for hours after an all-female version of Much Ado About Nothing.  The Globe, by the by, while producing some brilliant stuff often, produces some absolutely brilliant comedy almost all the time.  I have never laughed so hard at Shakespeare’s comedies (which lets face it, are sometimes not as funny as his tragedies…) as I have at the Globe.  I’ve also stood through a lot of non-Shakespearean stuff; being bombarded by bread in the name of the French Revolution being my most recent experience.  There are some snags; being a groundling is undeniably tough on your kneecaps, so that by the 3rd  hour there is a growing urge to grab Hamlet by the throat and scream ‘just kill him already!’  But it is a small price to pay for some of the most exciting summer nights I have ever spent in front of a stage… rained on or otherwise…