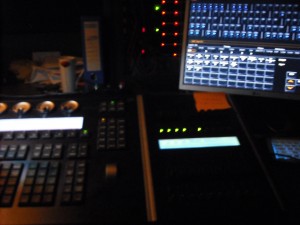 Firstly, it’s been, as always, an age since I last posted.   More over, it’s taken me an age to work out how to read the large collection of very nice comments that have been left on the site – I wish there was some handy excuse for why I don’t know how to work my own blog, but since there isn’t, I’ll apologise for having to taken so long to finally figure it out…

Secondly, in the interest of explaining why I haven’t blogged for an age, I thought I might fall back on my usual (and true) explanation and, as always, blame RADA.

I have in the last six weeks been in the RADA Lighting Department, and let’s not beat about the bush here, lighting is cool.  We’re dealing with wattages to make your eyes water, some deeply shiny and ridiculously expensive equipment, movers and colours and washes and lenses and gobos and shutters and cabling!  God, I had no idea how much cabling!

More interestingly, and with my writer’s hat on for a moment, people who are involved in lights speak a foreign language known only to the mysteriously initiated.  For example, a conversation between a lighting designer and his/her in-house electrician could easily go something like this:

Designer:  Have you rigged the VL6s?

Electrician: Yeah, but we need to daisy chain the DMX up to the smart repeater before I can give you patch channels.

Designer:  I want the soft patch to go to 13, 16 bit extended.  There should be enough left in universe 1.

Electrician:  Sure, lemme grab the dimmers for blue off the plan.

Now… you, dear reader, may be able to comprehend all this and even know which button to press without having to think too hard about all this.  But if you have, you may as well accept right here, right now, it is because you are a ridiculously well-informed individual with geeky inclinings.  Six weeks its taken me to vaguely grasp the lingo, and finally I almost understand 16 bit motor jokes.  I almost get why it’s funny that someone got a T29 for a cantata fresnel when actually he was only after a T27 for a rama PC (raucous laughter) and can almost but not quite sympathize with the pain of a dodgy pacific profile microswitch.  Almost… but not quite…

That said, I love lights.  Without wanting to wax too lyrical about it, a good bit of lighting can make a play, complete the illusion, trick the mind into wandering into a story without letting the body remind the brain that it’s wedged into a chair smaller than a Ryanair Economy Class seat, listening to a man in a silly moustache talk about incest in a living room made of plywood.  But since good lighting is in itself by definition not really noticeable, being part of the illusion, it’s much easier to say that bad lighting, when it’s bad, is really really bad, and can destroy an experience just by being noticed.

I have been programmer and board operator for the last three weeks, which has meant three weeks in a darkened room listening to the foreign language of lighting design and eating just ridiculous quantities of smarties.  (I am a sucker for supermarket 2 -for-1 special offers.)  13 hours a day, six days a week in semi-darkness plays merry hell with your body clock, but it has been well worth it.  I was lucky in that my designer possessed infinite patience, humour and good will – but to cut a long story short, this has been the cause of my absense, and because 99% of my work was carried on in darkness, I have nothing but this one crummy photo to show for it….

… and the chief wisdom my lighting designer had to impart at the end of three weeks of ‘cue, update, enter’?