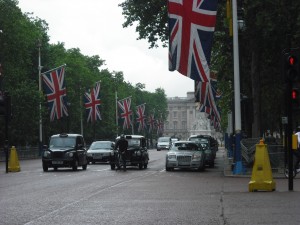 So, circumstance conspired to take me into the City of Westminster.  This is not somewhere I regularly visit, but a trade show at Victoria showcasing all things theatrical and nerdy, combined with a tube strike, took me off my regular travel patterns.  I had to get from Victoria to Euston, and hadn’t packed an A-Z.  Needless to say, I thought it would be a really good idea to try navigating by a combination of the compass on my keyring, (since I knew Euston was vaguely north eastish) by the London Eye (vaguely southish) and the BT Tower (somewhere reasonably close to my final destination).  Armed with this infallible plan, I set off.

There is a lot to say about Westminster.  For a start, there’s a lot to say about why it is the City of Westminster, as proclaimed proudly on every street sign.  But there’s a lot of history involved in that, enough to justify its own blog entry at a later date.  However, my first clue that the nature of the streets I was about to change was when, passing New Scotland Yard, I ran into St. James Park station.  I looked for a park, and couldn’t see one, so considered it a geographical blip and kept on walking.  A few streets later, I turned a corner, and bham, a park seemed to have popped out of no where.  Let me repeat – I don’t know this part of town at all, I’d just wandered past the Ministry of Justice and then whoops, a park.

And not just any park.  St. James Park is the first royal park, which, while perhaps it doesn’t hold as much significance now as it did once upon a time, still suggests more than your usual ‘council green space’ of sad withering grass.  Once upon a time, it was a place for kings and queens to flirt recklessly while wearing very big wigs and recklessly tight trousers.  The wigs grew shorter and the trousers remained tight through the Victorian period, when St. James changed into a place of flirtatious meetings and sly understanding exchanged between members of the upper middle classes and aristocracy out for a ride on a fine day.  Even when it became swallowed up entirely by the rest of the city, it still retained those characteristics that let you know about its history.  A lake runs roughly down its middle, and from a bridge in the middle you can see both Buckingham Palace and Westminster, which could perhaps give the misguided impression that the Prime Minister canoes to his weekly visit with the Queen.  (Perhaps he should?)  The trees are old and tall, the grass is well tended, there are great fat flowerbeds of foxgloves drooping under their own weights, ducks and geese and ladies willing to feed them.   At the top of St. James is The Mall, which runs from Trafalgar Square to the front door of Buckingham Palace and is one of the few places in London where you can regularly see both horses taller than a grown man ridden by coppers or occasionally the royal horse guard, and dozens of British flags being flown as something other than an ironic or politically dubious statement.

As well as its royal history, St. James Park has a good fictional history.  Its served its time mostly as a setting for various spy thrillers; from John le Carre via the Ipcress File to Spooks, various generations of dark-jacket-wearing spies have held mysterious and secretive meetings on the benches of St James.  Tourists and civil servants are the main visitors, and you can see as many big blue umbrellas bearing the stars of the EU on their top as you can t-shirts saying ‘I Love London’.