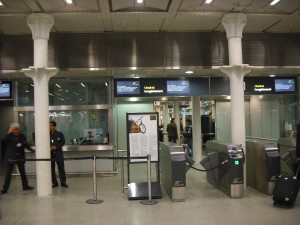 There’s an argument that these two stations ought to really be tackled separately, since there’s a lot to say about both of them.  But if Transport for London doesn’t mind clumping them together, then I’m not about to w0rry.  These two stations sit on the end of the Euston Road, in a part of London that has a reputation for being kinda squalid that it both does and doesn’t deserve.  Yes, there’s more than a little illicit night-time activity goes down in the back streets around Kings Cross, and yes, coppers are always around, and no, stations generally aren’t that beautiful and don’t necessarily attract good vibes.  But in defense of the local area, it should be said that there’s a whole development scheme going on as part of St. Pancras becoming an international terminal; hotels have gone up-market, cafes have moved in, windows have been cleaned, doorsteps scrubbed and everything generally polished up.  Mostly, you kinda suspect, because the London authorities can’t bear the idea of Frenchmen coming from Paris to London getting out at a crappy station, and judging.  Because that’s what all London authorities imagine your Parisian traveller does.  (I should add that anyone coming from Brusselles Midi will have no choice but to be impressed by Kings Cross St. Pancras, because Brusselles Midi a station with almost no redeeming feature whatsoever.)

St. Pancras was actually built as part of a competition to build the news Houses of Parliament, after the original burnt down in 1834.  For years it slumbered as a huge gothic monument to Victorian ambition, servicing not very glamorous lines to not very exciting places.  Then Eurostar came along, and all of a sudden, St. Pancras was taking a leaf out of Liverpool Street Station’s book, and everything was shiny, glassy, well-lit in a cool light and generally radiating expresso and champagne.  Trains head off to Paris or Disneyland, Lille or Brussels, as well as rather less glamorous destinations like Sutton or Bedford.

Twenty yards away, Kings Cross services the lines to Cambridge, Edinburgh and Leeds, (as well as Hogwarts) and its main hall is never ever not packed with people waiting to catch the fat lumbering trains that sit farting in its platform like elephants after a dodgy seafood meal.  You usually stand a good chance of hearing a Geordie or a Scottish accent outside Kings Cross, although going the other way is heavily disencouraged by having to go via a ticket hall that moves at a speed to make tectonic drift seem sparky.

Underneath all this lot, you can find Piccadilly, Northern, Circle, Metropolitan, Hammersmith and City and Victoria Line trains all competing for space at the bottom of a maze of escallators.  In 1987, there was a fire in Kings Cross, in which 31 people died.  This was in the day in which escallators were wood, and cigarette smoking was still permitted on the underground.  A plaque can still be found commemorating it, though you have to look a bit to find it.

Buses also converge on these two stations, although strangely enough, the 205, which is supposed to pass through, can almost never, ever be found when you need to catch it ever.  Sages agree that it is far, far faster to get out and walk between the stops on Pentonville Road, outside the ex-Thameslink station (disused after St.Pancras got its make-over), to the next stop thirty yards ahead, than to wait for your bus to go round the one-way system where Kings Cross Road meets the Euston Road meets York Way, as those particular thirty-yards are contenders for the slowest in London.